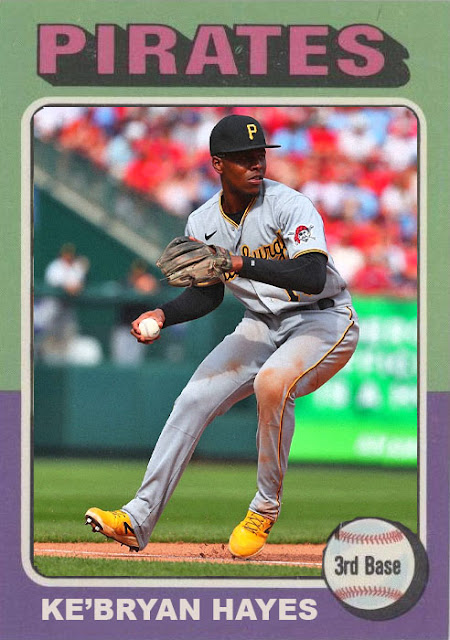 And it's odd, because the decision-making is still at a fifth place level. Oneil Cruz, who was called up very late in the 2021 season, is major league ready. He's in Indianapolis right now and is just...not loving it at all. He's hitting .176 essentially in protest, just patiently waiting for a call-up. Now, there is room for him right now. Kevin Newman, the starting shortstop, is injured. The starting 1st and 2nd basemen, Yoshi Tsutsugo and Josh VanMeter, aren't hitting. Michael Chavis, who is hitting, can play first and second. Diego Castillo, who sort of is hitting, can play second or third. Cole Tucker, the other shortstop on the roster, is mostly playing the outfield.

So there is literally room...to promote the shortstop who is ready to play for the Pirates, RIGHT NOW. But Ben Cherington is playing the whole 'he's where he needs to be right now' bullshit right now. Between that and Doc Rivers saying that DeAndre Jordan has a right to start games over Paul Reed because 'that's the way I've said things are right now', I am getting so tired of people refusing to play better younger players because of 'the way things are' or 'the way things need to be'. Screw decorum, play to win. Oneil Cruz is ready, promote him. Don't dilly-dally and wait for the Cubs to overtake them in the standings, call the man up.

The team could honestly use the help. Ke'Bryan Hayes is the star they wanted, and hitting .333 with 24 hits and 6 RBIs, but Bryan Reynolds is only hitting .200. Vogey and Chavis are great at supplying power but both of them lead the team in home runs with 3. The choice of catcher is between a fairly mediocre Roberto Perez performance and Andrew Knapp's usual anti-average offense. There's just not a hell of a lot going on in this lineup, and it's the kind of thing that Cruz can only help.

The wild thing is the pitching is actually doing pretty well, and it might be the thing keeping them out of last. As reported, the Reds have absolutely no pitching right now. The Pirates, meanwhile, have a surprise comeback season from Jose Quintana, and more strong relief work from David Bednar, Chris Stratton, Wil Crowe and Chase De Jong. What's alarming is that none of their starters have amassed any wins, which you can attribute either to the fact that pitchers are only going for 5 innings really, or just...they're not very good.

This is a flawed Pirates team. I'm not saying calling up Oneil Cruz will save everything. But it just might help.

Coming Tonight: A rare A's starter that actually stuck around this year.