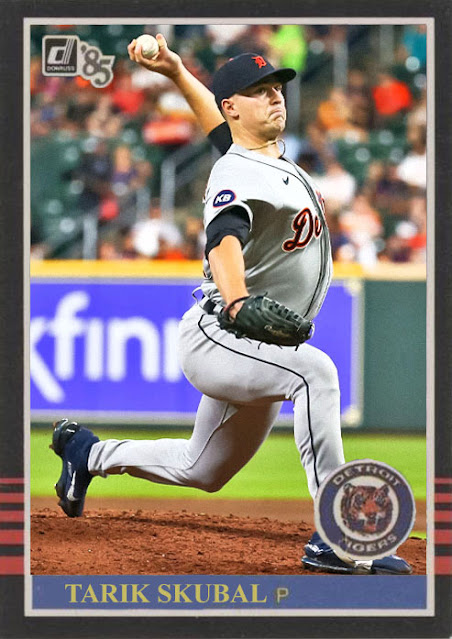 The Detroit Tigers have two former #1 draft picks in their primes on the team right now, and neither is doing particularly well. Spencer Torkelson is hitting .173 with 37 strikeouts, and Casey Mize is still injured. Additionally, Riley Greene is still injured, cause he's not up in the majors right now. The three prospects who were supposed to save this team aren't doing so at all.

And so it's up to other prospects. And they've called up lots of them in Detroit. Ones from last year, ones from two years ago, new ones. It's a group prospect effort. Like, Tarik Skubal, who came up in 2020, is having a fantastic season so far, with a 3-2 record, a 2.50 ERA and 45 Ks. Alex Faedo, who came up this month, has been fantastic in 3 starts, with a 2.87 ERA and 12 Ks. Derek Hill and Daz Cameron, rookies of the last few years, have been getting reps in the outfield and they've been doing decent work.

Though, interestingly, it's the people who the Tigers brought in to help the homegrown guys that are the ones who are doing most of the heavy lifting right now. And not just the big guns like Baez, Barnhart and Meadows. Michael Pineda, a cheap free agent pick up, had a 3.22 ERA before landing on the IL. Andrew Chafin is back to his Cubs numbers, and has struck out 10 batters in 7.2 innings. Re-upping Wily Peralta turned out to be a smart move, because he has a 1.10 ERA in mostly long relief work. And slowly, SLOWLY, Eduardo Rodriguez is getting back to his peak consistency.

But the thought that the mixture of a healthy youth movement and decent contracts would make this team a competitor was a mistaken one. This is still very much a last place team that will have decent wins and big heroes but still not do anything that disrupts the Twins or White Sox. And I kinda hope Javier Baez knew something of that when he signed, cause he seemed pretty happy chasing a playoff spot in Queens last year and he's really not gonna be doing that now...while the Mets are the alpha of the NL East starting Jeff McNeil everyday.

The Tigers aren't gonna be much this year. It'd be nice if the homegrown stars could blossom a bit more, but...alas.

Coming Tomorrow- A year ago he was out of the league basically. Now he's just lucky there's a team bad enough to start him everyday.