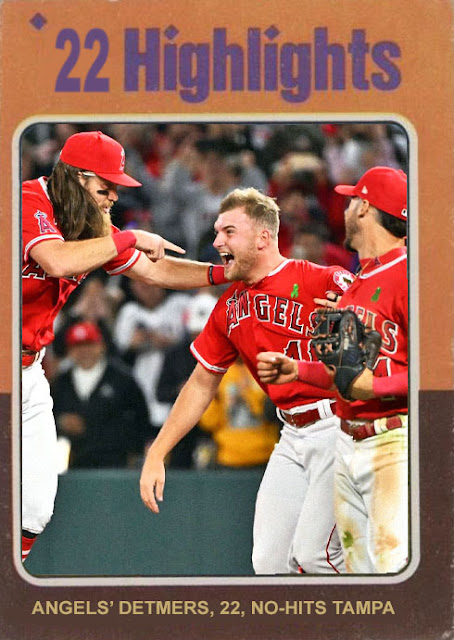 I didn't do a highlight custom of the Mets' no-no over Philly because A.) I was still disgusted by it, and B.) combined no-hitters are harder to do customs of because you just have the closer celebrating, or C.) it's hard to get all five pitchers in a vertical shot. Like, the custom would have just been Edwin Diaz. We don't need that. You need the whole story.

And this season especially, I have worried that the complete game shutout no-no is an endangered species in itself, due to pitchers throwing as hard as hell on every pitch and only lasting 5 innings. Last year, we had Spencer Turnbull and Corey Kluber pitch no-hitters only to be completely shut down for swaths of the season. Even Wade Miley, who pitched a no-hitter without throwing too hard, is just now appearing for the Cubs. It's become the home run derby for pitchers, and it's hard to fully transition back from, so...combined no-nos, folks. Don't ya love 'em?

But yesterday we were on the brink of like THREE solo no-hitters. One was from Yusei Kikuchi, which the Yankees thankfully obliterated any chance of. One was from Justin Verlander, who had a definite shot at going all 9 before giving up a measly hit in the 8th. And the other was Reid Detmers, an Angels hurler who had come up late last year and had raised eyebrows by starting 2022 in the rotation. And there he was, no-hitting the Rays, behind some insane offense led by some Trout home runs and, eventually, Anthony Rendon hitting a bomb off of Brett Phillips from the opposite side of the plate.

I hesitantly followed the last inning, and prepared for yet another 'just missed it' one, as these were the Rays, who aren't bad at all this year. But, it was Detmers against the latter third of the Rays' lineup and Yandy Diaz, and he made quick work of them, not with strikeouts or high power but with making sure that every ball came right towards an Angels fielder. That is the kind of crafty, intelligent pitching that we only see rarely these days, and it's the kind of no-no that, despite going 100 pitches, will conserve Detmers' arm in the long run.

Triumphant moment for baseball, the Angels, and Reid Detmers. I hope the next one is just as triumphant, and isn't combined.