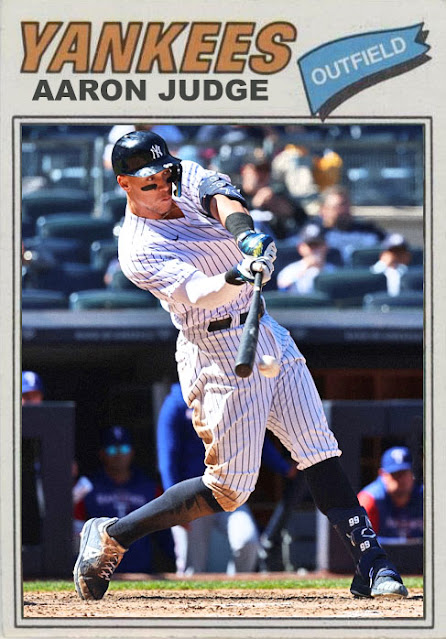 The Yankees are 29-10. Only 4 of those losses have come in May. And this was the team I thought wouldn't be able to beat Boston or Tampa.

Maybe it's me. Maybe I'm just so terrible at predicting things that I've cut a hole in the universe. But this team does well when I expect them to fail and fails when I expect them to do well. And I'm afraid to get too confident and expect them to go all the way because I know they'll disappoint me. But...basically the whole team's playing really well right now. Just some catching issues and some guys like Loiasiga and Hicks who aren't keeping up with the rest of the pack, but...there is so much depth and variety to this team. It's not just on Judge and Stanton to hit all the home runs; D.J. LeMahieu hit a grand slam earlier today. It's not on all the big strikeout artists to walk away with wins- Nestor Cortes has a 1.80 ERA and 56 strikeouts. It's all spread out.

That being said, this team does come down to Aaron Judge, and he is delivering. This is his age 30 season, potentially the last year of his contract with the Yankees, he's been one of the strongest hitters in baseball since coming up in 2016, and this is another year where I'm thinking he'll get MVP votes. His 14 home runs lead the league, and he's also hitting .302, which is rare for him as a power hitter, and has 30 RBIs. That's some well rounded stats so far, proving he can also contact hit and go not just for the long ball. He's not even leading the team in strikeouts [that, unsurprisingly, would be Joey Gallo], but he's definitely the standard for the offense. And having him on is also lifting people like Gleyber Torres, Josh Donaldson, D.J. LeMahieu and, yes, Giancarlo Stanton, who's also having a great season. What worries me is that Anthony Rizzo has gone a bit colder since we've gotten further into May, but he's still capable of a lot, especially in this lineup.

Just watching today, I'm amazed at how much depth we have. Clay Holmes can close games if he wants to. He's on a hefty scoreless innings streak, and worked the ninth today. I know we have Chapman but he's been giving up homers a bit lately, as he tends to, and so...it's an option. We also have two long-men, Michael King and Clarke Schmidt, who can work long innings of relief to circumvent pitchers being taken out too early, and who could potentially start games if people [god forbid] start getting injured. What's fantastic is that we've done a great job of starting pitching maintenance so far. Sevvy's not throwing quite as hard, Cole is taking a more varied approach [read: he's not tacking up anymore], and Taillon and Montgomery are just solid mid-rotation choices. I said something similar last year and then Kluber and Taillon went down, so I hope it's not a 'well, it's May' sort of thing, but...the fact that we've only really had to start 5 guys so far, and that they're all in good shape, is a very good thing.

It is still early, and the Yankees have been guilty of peaking in May before, especially as June, aka The Month Where the Blue Jays Absolutely Catch Fire And Nobody Can Stop Them, approaches, but I still feel pretty good about this team. I'm purposely underestimating them a bit, and going into the next few games I'll be alright if they can't get past either Kopech or Cueto, but...at the same time, this team might just be that good.

Coming Tomorrow- Elsewhere in New York, a pitcher who was just re-upped fights to stay healthy as his rotation battery members drop.