Seven Stands for Something 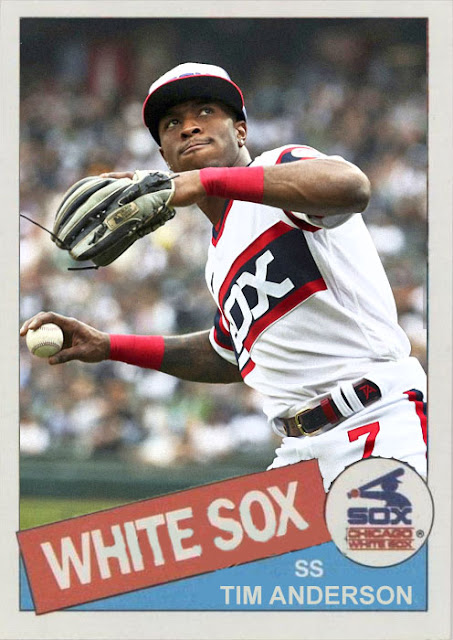 I wish we lived in a world where Tim Anderson could have one full year without butting heads with some moron about something asinine, but...this is the only world we've got.

Last year, Anderson, quite predictably, clashed with Tony LaRussa, whose old-school managerial style clashed with Anderson's status as a trailblazer for black athletes in a time of racial injustice. What has amazed me thus far this year is how cordial the two of them have been. I haven't heard LaRussa's name at all since the season began. Typically if you don't hear the manager's name at all, that means they're either not doing anything too huge, nobody's on twitter calling for their firing, or they're really not at fault for either the win or the loss. And that's where we're at. Everyone's talking about Tim Anderson because he's hitting .365 and the chief lineup performer on the White Sox, and no one's talking about Tim Anderson because he hasn't benched a rookie due to unwritten rules yet.

So, okay, the LaRussa thing seems to be on the back burner, so Anderson doesn't have any shit to worry about, right? Wrong. Here comes Josh Donaldson trying to be a smartass, trying to get a rise out of Anderson and getting himself suspended over racist crap.

On one hand, I was initially surprised because usually the players who say something racist are relievers. John Rocker, Jonathan Papelbon, Josh Hader. You know, continue the tradition. There's a literal Australian that's one of the best closers in baseball, he hasn't done any racist stuff. Mostly because he's Anderson's teammate now. But Donaldson just...said something stupid, and exacerbated a rivalry that was already burgeoning with the White Sox because of a controversial slide the week before. So now he's going and calling him a name just to get him mad, just because Tim Anderson is...doing really well right now and considers himself a trailblazer for black athletes?

I usually take the side of the Yankees, but Donaldson really should have picked a different battle. I already thought Yankees-White Sox was gonna become a big rivalry intrinsically with must-see matchups on network TV, but if it starts to become a rivalry over some racist stuff that we KNOW Donaldson's in the wrong for, then what's the point? And now every subsequent Yanks-White Sox matchup is gonna have that ugly subtext to it. Every time Anderson and Donaldson meet on the base paths, it's just gonna be ugly.

I already respect how Anderson plays the game, because he's a natural hitter who's had several awesome seasons, and has been one of the reasons why the Sox are as powerful as they are [even in a down year]. I also respect him taking the high road through this and being the mature, composed antithesis to Donaldson's pissy complaining about missing a game or whatnot. I'm trying to like Donaldson cause he's doing well for my team, but if he's gonna pull this shit on people who deserve to be there, it's gonna be way harder to like him.

I think the White Sox are a tough competitor, they have a lot going for them, especially now with Michael Kopech, Johnny Cueto and Luis Robert all rolling. I just...feel really bad that any matchup the White Sox have with the Yankees from here on out because my team's the bullies, the antagonists. And I hate that.

I've predicted the White Sox to make the World Series the last 2 seasons. Maybe if I don't this year they'll actually surprise me.

Coming Tomorrow- One of five people with major Hall of Fame cases on one team. I would rank this one third of five in terms of probability to make the Hall.