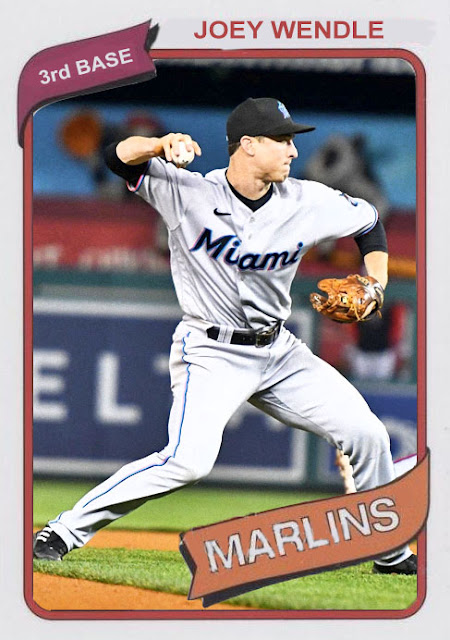 Joey Wendle, right now, is fitting in fairly well in a bench infield position for the Marlins. He's hitting .279 with 11 RBIs in 28 games, and he's finally figuring back into the infield conversation after being injured for a week or so. And as alright as the Marlins are right now, that's not what I want to focus on.

I want to focus on the fact that up until this season, Wendle could have been having this exact same season in Tampa.

The Rays' ultimate strategy is staying a low-budget team while keeping a competitive mindset. They have an exquisite farm system and are able to cultivate your players and give them time to come up, while also giving them room to come up by trading away veterans before they can make money off of them. This has happened numerous times over the past few years, and it's become an understandable, but alarming, theme. I get why the Rays want to do this, but it's become so heartbreaking to see them just deal away great players and continue competing.

Like I did with the ex-Yankee prospect marker earlier this season, I thought I'd look at each of the other 29 teams and talk about people who the Rays have traded away rather than pay money for a re-up. Cause, remember...they just paid Wander Franco a lot of money. They could always do this. But they still let great players get away, mostly in trades.

Angels: Matt Duffy was cut by the team in 2019, only to become a cheap bench piece for the Cubs and now the Angels.

Astros: Ryne Stanek was dealt to Miami in exchange for Trevor Richards, now he's a setup man and relief specialist in Houston.

Athletics: I think this sort of counts, but the Rays did trade Stephen Vogt to the A's before he had the chance to become a starting catcher. Adam Kolarek was also shipped to LA before he could really improve on his 2020 season, and now is a decent reliever in Oakland.

Blue Jays: Trevor Richards, who himself was traded for Ryne Stanek, was himself traded to Milwaukee along with Rays piece they didn't want to pay.

Braves: The Rays finally had a reliable catcher in Travis D'Arnaud after 2019...but they decided to let him become a free agent and come to Atlanta. They didn't wanna keep Guillermo Heredia either, so they let him sign with Pittsburgh. Quite obviously they didn't want to give Charlie Morton more money, even if he'd be a backbone for their rotation, so they didn't re-sign him. And just last year, the Rays had Collin McHugh, and could have re-upped HIM...but, you know, they let him sign a free agent deal with Atlanta.

Brewers: Willy Adames is the most flagrant example of the Rays refusing to pay their stars and instead trading them away to make room for new stars they won't pay, though I think Adames has a right to be miffed that they're IMMEDIATELY paying Franco. They also could have re-signed Hunter Renfroe but instead let him go in exchange, ironically, for Manny Margot. And, quite obviously, Mike Brosseau was a hero with the 2020 Rays, and was subsequently traded to Milwaukee for it.

Cubs: Drew Smyly was traded to Seattle for Ryan Yarbrough, and bounced around for a bit before earning a ring with Atlanta and settling in Chicago. David Robertson had a strong finish last season in Tampa, but they decided not to give him a true 1-year deal the following year, so now he closes for the Cubs.

Dodgers: David Price is the blueprint for all of these.

Giants: And another classic is Evan Longoria, a foundational player who the Rays still didn't want to pay. Alex Cobb was also let go rather than being re-upped, and found more fame away from Tampa than he did in there.

Mariners: Diego Castillo was dealt to Seattle in the midst of a playoff campaign. While he was still doing well. That was when you knew that the Rays's strategy involved competing with less players than more. Also, Sergio Romo had an excellent comeback season with Tampa, and was rewarded with the Rays letting him walk. So he's played for 5 teams since.

Marlins: Aside from Wendle, Jesus Aguilar and Avisail Garcia had their tenures in Tampa financially cut short.

Padres: Most notably Wil Myers, in a massive deal for the Rays, as well as Blake Snell, fueled mainly by Kevin Cash pulling him early in a World Series game but also because they didn't want to pay him.

Phillies: Really just Jose Alvarado, who was a big piece of the Rays' homegrown bullpen til his non tendering.

Pirates: Michael Perez could have been a starting catcher in Tampa, but the brass there figured non-tendering him was a better idea, so he became a backup with Pittsburgh. Obviously Yoshi Tsutsugo wasn't to their liking despite the contract, so they cut him and let him become a hero with the Pirates.

Rangers: Nate Lowe was a depth piece that could have helped the Rays out, but he was traded unceremoniously to Arlington. Brad Miller was famously traded to Milwaukee, but, at the very least, for Ji-Man Choi. And Matt Moore was a huge rotation piece for Tampa before he was dealt to San Francisco during a playoff run.

Reds: Looking back on it now, perhaps trading Tommy Pham to San Diego was fueled by Pham not being a great person. Since then he's become one of the few lifelines the Reds have. Hunter Strickland was doing great for the Rays last year, but they didn't give him the kind of contract that'd sustain a demotion, so once the Rays waived him, someone took him.

Red Sox: So many. Christian Arroyo, Nate Eovaldi, Rich Hill...all important pieces for the Rays that when the time came, felt easier to deal than to sign.

Rockies: C.J. Cron had a great season for Tampa in 2018, but they decided to let him go to sign with Minnesota. Alex Colome was famously traded to Seattle in the middle of the season to keep the cap tight.

Tigers: AUSTIN MEADOWS, the latest and greatest star to get dealt regardless. This one flabbergasted me. Other than cap space, I couldn't think of a single reason to trade this guy.

Twins: Chris Archer's the big one, they've let him go twice. Emilio Pagan they traded to San Diego right before he could become the everyday closer.

So that's 20 out of 30 teams that have a remnant of the Rays' cost-cutting ways. That's...a lot. And again, I understand why they do it, I understand what it does to save money, but it doesn't make it any easier for great players asking for organizational loyalty. I wonder what Joey Wendle has to say about the Rays this year.