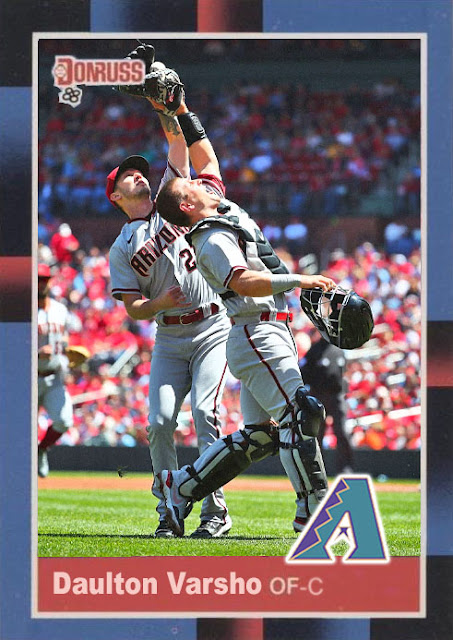 I dunno, putting a catcher with the name Daulton on a 1988 Donruss design just kinda felt right.

The Arizona Diamondbacks did something I didn't think they'd do this season. 2 things, really. They made it above .500 and spent some games at 4th place. That they did that alone is worth celebrating.

They're honestly not doing too badly, at 19-21, but for a team that was always gonna come in either 4th or last, the D-Backs have a lot to say for themselves right now. For instance, yesterday they had a guy, namely Josh Rojas, hit 3 home runs in a game. They also have a rotation where no one has an ERA over 4.50, which is rare for a last place team. Their marquee stars, like Ketel Marte, Zac Gallen, Christian Walker and Merrill Kelly, are actually worth the price of admission this year, and are beginning to get fans back in seats.

And what's most exciting about this team is that the slow rollout of the youth movement in Phoenix actually seems to be working. At the end of the 2020 season, the D-Backs brought up Pavin Smith and Daulton Varsho, and now they're both integral parts of the oufield. Varsho's having an excellent season, with 17 RBIs, 7 homers and a .790 OPS. Smith has 15 RBIs and 26 hits. Meanwhile there's guys from the latter half of 2021, like Seth Beer and Jake McCarthy, who got some stuff done earlier on but are hanging back in the minors.

And then there's some actual 2022 rookies. Gerardo Perdomo is starting at SS, and he's an excellent defender, especially alongside Marte. Alek Thomas is off to a phenomenal start in the outfield, and had a homer yesterday amid all the Rojas ones. Humberto Castellanos is starting regularly and doing pretty damned well, keeping his ERA around 4. The layering of the different incarnations of this team's youth movements is being very well handled, a lot better than the Tigers honestly.

I don't expect the D-Backs to accomplish a great deal, but if people like Varsho, Gallen and Marte end with great seasons, more power to them. It'll be better for the long run, especially if they stick around.