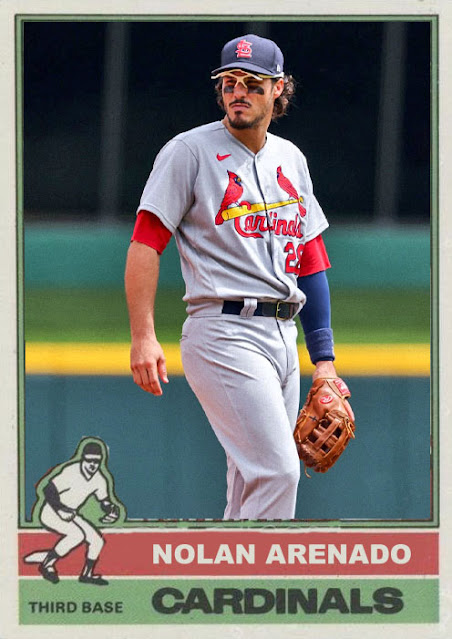 Lots of third baseman right now with potential Hall of Fame cases. Manny Machado. Nolan Arenado. Josh Donaldson. Evan Longoria. Jose Ramirez. Pujols and Cabrera played third for a day or so. I'm not saying all of them will make it but a lot of them will.

I'm a little sad that he didn't get an MVP during his peak years, from 2015 to 2019. From that time period, people like Cody Bellinger, Christian Yelich, Giancarlo Stanton, Kris Bryant and Bryce Harper. One of the issues I have with awards like this is that they reward large blips on the radar but not insane consistency, and it's rare that they give an award to someone like Joey Votto, or Barry Larkin, just for being consistent over a long period of time. You could also call the people they give multiple consecutive awards to, the Greg Maddux, Pedro Martinez, Randy Johnson category of these, but...a lot of people who were really good one year and sort of faded back in afterwards. Whereas all the while Nolan Arenado has been having a 6 or 7 WAR every year and only getting as far as 3rd in the voting.

I think this is his year. The Cardinals are a much more varied, complete team than a lot of his Rockies ones were, and like in Denver he's not the complete centerpiece of the lineup. On a given day you can rely on Tommy Edman for a double or Tyler O'Neill for a homer or Paul Goldschmidt for something, so it's not solely on Arenado's shoulders, but he's still playing like an absolute pro regardless. And even if the race is tough with the Brewers, who are on a pretty awesome tear right now, Arenado could be the deciding element that puts the Cardinals forward.

This season, I don't hate the Cardinals as much as usual. They still have Molina, Wainwright, their usual cast of infuriating figures, but...they're non ironically good and aren't waiting til August to tell us. And Nolan Arenado is legit. Maybe he's the reason why I don't hate them anymore. Wouldn't that be something?

Coming Tonight: He left Philly and joined a punchline, and is helping make them a contender.