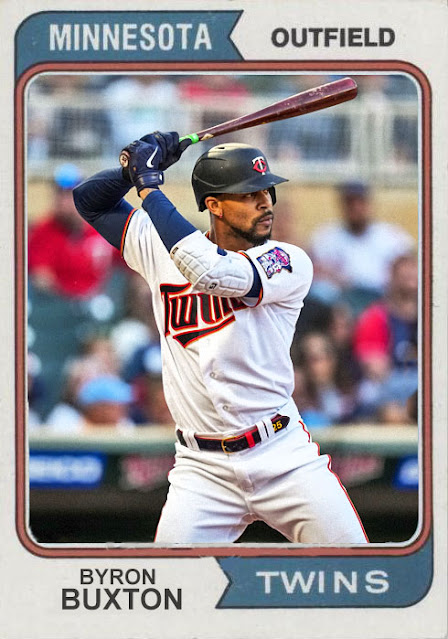 The conversation needs to be had of 'how good of a career would Byron Buxton have right now if he was at all able to stay healthy?'

All things considered, Buxton has played just one full season, in 2017, and even that was an age 23 season where he was still warming up and coming into his own, despite a 4.9 WAR and 29 steals. Buxton has matured into a pure hitter, an efficient power bat who has knocked 11 homers so far this season. But every season since 2017 he's struggled with staying healthy, culminating in an ever-so-heartbreaking 2021, where an injury ruined what could have been an MVP year for Buxton.

The best news about the injury he suffered last year is that it protected him from being traded someplace like San Diego. Now he gets to suit up and hit home runs for the Twins again, as they return to 1st place.

Regardless of the fact that Buxton isn't exactly hitting for average, 21 RBIs and 11 home runs is a very good look to be leading the team with. It's clear that the rest of the squad looks to Buxton as an authority figure, even if he is only 28, and Buxton having another nice season, even if he does miss a little time here and there, does keep the team centered as it goes into the heat of the season. I don't think Correa can be relied upon fully as a centerpiece yet, and Kepler and Polanco are too inconsistent, even if they are all doing well do far. Plus, now Gio Urshela is beginning to heat up at the plate, which will only help the Twins. It does shock me still that Gary Sanchez has only hit 3 home runs. I suppose we gave him up at the right time, especially considering how the returns are doing [racism notwithstanding].

It's also very promising to see the callups like Jose Miranda, Gilberto Celestino and Royce Lewis playing such a role in this team. Celestino seems to be pretty ready, as he's chasing Nick Gordon for a starting OF spot. Miranda is taking a bit more time, but he is a pretty useful infield piece, especially in Sano's absence. Lewis was doing so well covering for Correa that people began to think that Correa might get dealt so Lewis can play everyday, and while I don't think the Twins would do that so soon with their big 2022 pickup...I would rather see Lewis start than Correa, honestly.

The burgeoning youth is a fine factor in this team's success. Josh Winder was having a great go of things before he got injured. The second you forgot about him, South Jersey native Devin Smeltzer sprung back into the fold and notched two careful, low-hit starts. People like Bailey Ober and Joe Ryan are ruling this rotation in favor of people like Sonny Gray or Dylan Bundy, and it's very promising.

The White Sox are 4 games back as I write this, so the Twins' lead isn't guaranteed for the next stretch, but the Twins have stayed very hot recently, and they're just now getting some big pieces back from the IL, so maybe that'll propel them further into the lead.