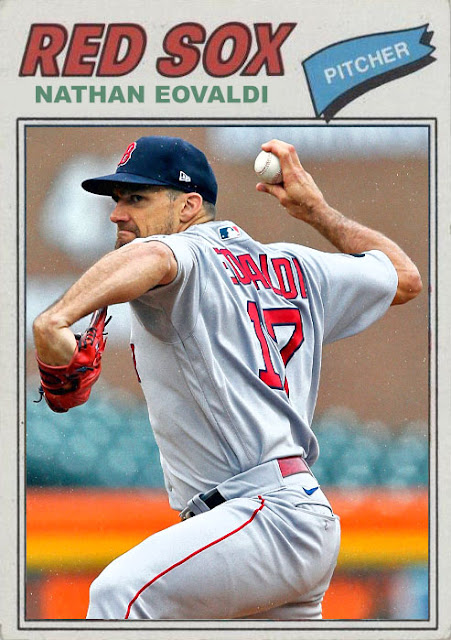 My dad has the theory that the reason why the Yankees have had such a strong start and the Red Sox have had such a weak one is all in scheduling. The only competitive teams the Yankees have had to play have been Toronto, Cleveland and Chicago. No Tampa series' yet, no west coast road trips yet. Meanwhile, the Red Sox have had series' against the Twins, Blue Jays, Rays, Angels, White Sox, Braves and Yankees, and this week they have to play the Astros. Next we're gonna drive through that cactus field as well, which is right next to all those overturned rakes, and down the street from the parade of elephants celebrating Hannibal's ascent of the alps.

My dad is also convinced that even though the Red Sox are bad now, and are in last as I write this, they will get hot suddenly and be unstoppable. And looking at this Red Sox team...okay, there is the POTENTIAL for that. Is there a red-hot ace? Yes, Nathan Eovaldi is excellent as usual, and has 42 Ks over 7 starts. Have the big hitters shown up? Yes, Xander Bogaerts, Rafael Devers and J.D. Martinez are all hitting, even if the power numbers haven't exactly come through yet. Is there depth and flexibility? Yes, Garrett Whitlock can start games and Jarren Duran and Jaylin Davis are down in Worcester ready to go when needed.

But...what is this team as a whole? Well...a disappointment.

A lot of the intrigue of this team was based on the signing of Trevor Story, who was willing to move over to 2nd base to accommodate Xander Bogaerts in what may be his last year in Boston. Unfortunately, Story is not as adept a 2nd baseman as he is a shortstop, he's only hitting .210 and has only hit 1 home run. Say what you will about Javier Baez, Carlos Correa and Corey Seager, but they're all hitting to some degree right now. Story is not delivering to the degree that he did in Denver, and it is almost heartbreaking. Additionally, last year's success story Kiké Hernandez isn't hitting, perennial power man Bobby Dalbec isn't hitting, and defensive hero Jackie Bradley, as usual, isn't hitting.

As for the rotation...while Rich Hill did just get activated, Michael Wacha, Chris Sale and James Paxton are all injured, making it hard for the Sox to keep things together. It also doesn't help that two of the healthy starters they have, Nick Pivetta and Tanner Houck, both have ERAs around 5. So even if Eovaldi's doing well this season, you're relying on him and Rich Hill basically. If you only have 2 good starters and one of them is a 41-year old trickster who's basically Bartolo Colon if he was from Boston instead of the DR, you need to rethink things. The WooSox have Connor Seabold doing well right now, he's always an option.

So what I'm saying is, for the Sox to be able to compete and come back from this, a lot needs to snap into place at once, and a lot of disappointments need to turn around. I wanna give them the benefit of the doubt and assume they're just having a tough month or so, but a lot of this team doesn't necessarily scream 'competitor' right now.

Coming Tomorrow- A perennial ace whose team just went toe-to-toe with the best team in the NL.