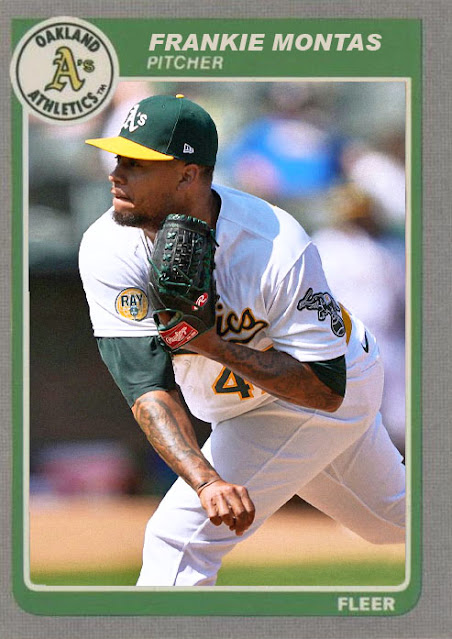 Is it funny to anyone else that the one big player to survive the vivisection of the Athletics was the guy who was traded like 3 times before he found a place to pitch in?

There are some small pieces of the competitive A's teams left, like Ramon Laureano, Chad Pinder, Lou Trivino and Sean Murphy, but Frankie Montas is the only big one that remains. Montas may have been outshined by people like Mike Fiers, Sean Manaea and Chris Bassitt, but he was still a solid arm for the A's in and out of suspensions and injuries.

But...what's very funny is that even if he decided to stick around and cultivate the next chapter of the team, you look at the rotation and the next chapter already seems to be leaving Montas behind.

Right now, the best numbers in the rotation are coming from Paul Blackburn, finally relied upon to be a full-time starter. Cole Irvin's gone 2-1 with a 2.35 ERA, he's coming off sharp. Daulton Jeffries is also becoming a pretty solid starting arm. Kaprielian is back from the IL and though his first start was a bit scary, he's still capable of great things and could be an A for a bit. Montas...seems like he's pitching to stay here til at least July. And while I don't blame him...it does stand out.

As for the rest of the team, uh....it's there. Sheldon Neuse has turned out to be a great player and is batting .300, but...I kinda feel bad that we had to wait til all the big players left Oakland to find this out. There was really no room for him all this time? It risked being picked up by the Dodgers for a playoff run and loaned back? Murph and Kemp are acting like their old selves, but there's still a lot of dead air from veterans like Piscotty and Lowrie. And while Cristian Pache's defense is still eye-popping, he's gotta pick up offensively one of these days.

The A's have been suggested the role of the fall guys in the AL West, and while that's really more the Rangers' thing so far, I don't think the A's really have a lot to do this season. I'm willing to be wrong, and I wanna see some cool things happen with this team, but with all the good stuff squeezed out of it, I'm not terribly hopeful.