After this post, there's 7 more of these 2020 Final Edition posts left, meaning they'll be done by around the third week of June. And while I hope you guys have been enjoying these...man am I excited to nearly be done with this project? Like, remember back in the olden days of the blogosphere where Ben Henry and Dayf and those guys did a countdown of a franken-80s set called the 792, and by the end they were exhausted and sick of posting out of that.

...shit, have we reached the generation of bloggers who weren't here for Cardboard Junkie and Baseball Card Blog? WHY DO I FEEL SO DAMN OLD?? I'M 25, FOR anyway,

These are the next 9 cards in the set, let's roll 'em 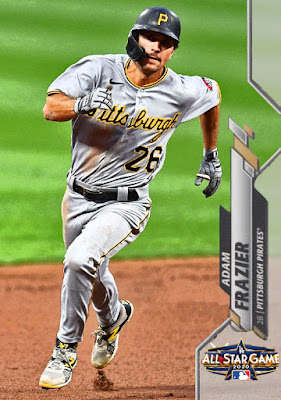 Card #253- Adam Frazier ASG, Pittsburgh Pirates
Adam Frazier would have been the only Pittsburgh Pirate on the 2020 NL ASG roster, had the game happened. He wouldn't have been a starter, and would only be a reserve utility infielder type, but as one of the few impressive performances to come out of Pittsburgh last year, it's somewhat understandable. Frazier was, and still is, one of the trickiest contact players in the game, and could be a decent trade piece for any competitor. 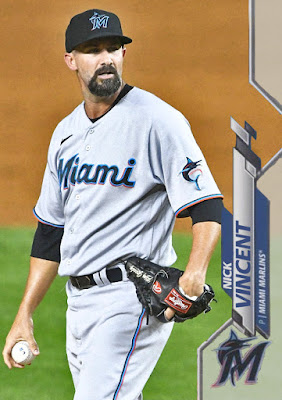 Card #254- Nick Vincent, Miami Marlins
Nick Vincent is one of those consistent reliever types that you don't hear much about because he always just does his job, plain and simple. After being a solid option for San Diego, Seattle, San Francisco and Philly, Vincent became one of the many relief arms enlisted into the Miami Marlins rotation. It was a slightly weightier season than Vincent was used to, with a 4.43 ERA and a 1-2 record. Vincent did pitch an inning of postseason baseball for the first time in his career, and got out of it without any runs, and with a strikeout. Vincent's currently waiting in the minor league system of the Rangers for another shot. 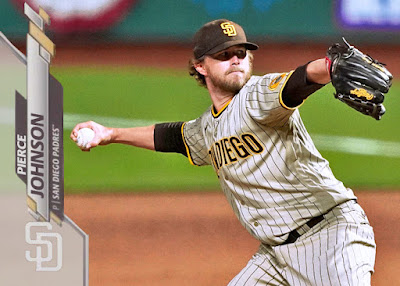 Card #255- Pierce Johnson, San Diego Padres
Speaking of another shot, that is exactly what the Padres gave Pierce Johnson in 2020, after an impressive season playing for the Hanshin Tigers. The Padres saw what Johnson did as a relief specialist in Japan and expounded on that, using Johnson as a setup man and mop-up man, and Johnson got a 2.70 ERA and 27 Ks out of it. He also stymied the Cardinals in 3 playoff games against them, despite giving up a few crucial runs to the Dodgers in the NLCS. Johnson is still one of the more relied-upon relievers on the Padres right now, and I hope he continues his success. 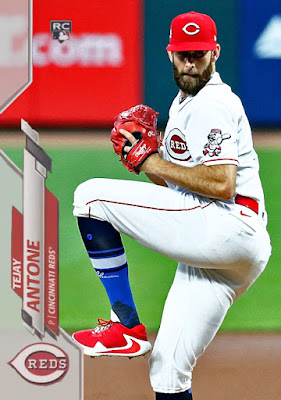 Card #256- Tejay Antone, Cincinnati Reds
After kicking around in the minors for about 5 years, Tejay Antone finally got a callup in Cincinnati. The Reds used him, as they previously had Michael Lorenzen, in a relief role that occasionally called for a start. Antone went 0-2 in 4 starts, with a 3.86 ERA and 18 Ks, while as a reliever he had a 1.89 ERA with 27 Ks. So...the Reds, therefore, decided to utilize Antone more out of the pen this season, which has resulted in him becoming the primary closing option thus far. So, well done Tejay, I suppose. 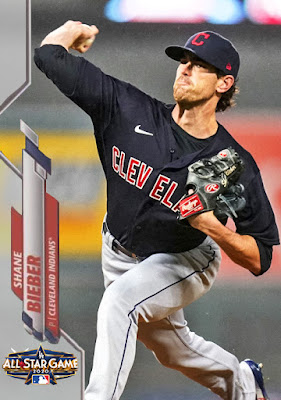 Card #257- Shane Bieber ASG, Cleveland Indians
This is gonna sound really obvious, but Shane Bieber would have started the 2020 ASG for the AL. Like...he was one of those rare pitchers who was the best pitcher in the league both at the halfway point AND after the season. Takes skill. But yeah, Bieber would get the start, and his 2nd ASG nod, and everybody would be pretty alright with that. Glad he's become one of the best arms in the league. 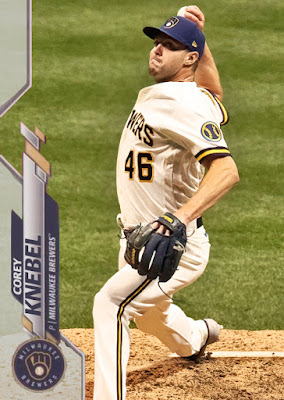 Card #258- Corey Knebel, Milwaukee Brewers
This exclusion was kinda odd to me. Corey Knebel has been a pretty prevalent reliever since his ASG nod 2017, and while he did miss all of 2019 due to injuries, Topps should have welcomed him back with a card. But alas, twas not the case. 2020 was incidentally a weak year for Knebel in Milwaukee, and ultimately his final year there. In 15 games, he had a 6.08 ERA and only 15 Ks. The Brewers let Knebel loose after the fact, and he's found a new home in LA. 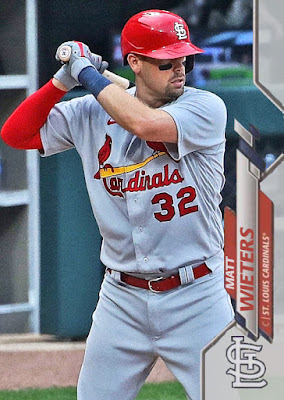 Card #259- Matt Wieters, St. Louis Cardinals
Another puzzling omission, but if you remember that not putting Matt Wieters in flagship was Topps' whole thing for 7 years, it makes a lot more sense. Wieters' 2nd year as the primary backup catcher in St. Louis was not as productive as his first. In 19 games, he hit .200 with only 4 RBIs, and was a replacement-level catcher at best. Wieters didn't sign anywhere this season, but he looks to be a part of the US Olympic team for this summer. 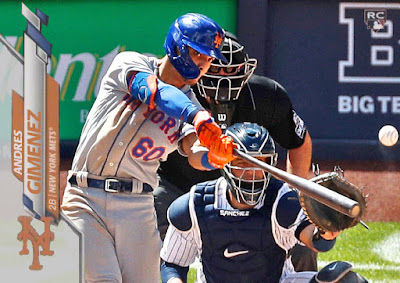 Card #260- Andres Gimenez, New York Mets
Of all the rookies in this set, Andres Gimenez is the one who suffered most from not having a 2020 flagship card, as his 2021 has been starkly different. Gimenez was brought up as a new infield option at 2nd and short, and for 49 games he made a name for himself as a strong hitter with great defensive abilities. His .263 average, 31 hits and 13 RBIs made him a strong contender for NL Rookie of the Year, despite coming in 7th, and his numbers would have made him a strong candidate for starting 2nd Baseman in the wake of Cano's suspension. But...the Mets wanted to use him as a trade piece in order to attract Francisco Lindor, in a trade that honestly hasn't really gone well for either party yet. 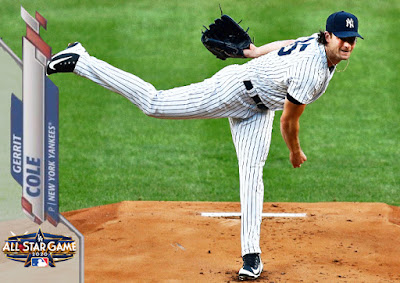 Like Bieber, a no brainer. Cole was one of the best pitchers in the AL last year, he got right into the groove of things as a Yankee, and would have definitely made the AL ASG team last year. He will likely make the squad this year as well, so it's not an entirely big loss. I'm just...insanely glad that this guy is on my team in his prime, and I hope his prime lasts as long as possible.

Friday, the next 9 cards in the set go up. We hit our third multiple of 90, and a lot of very interesting rookies.