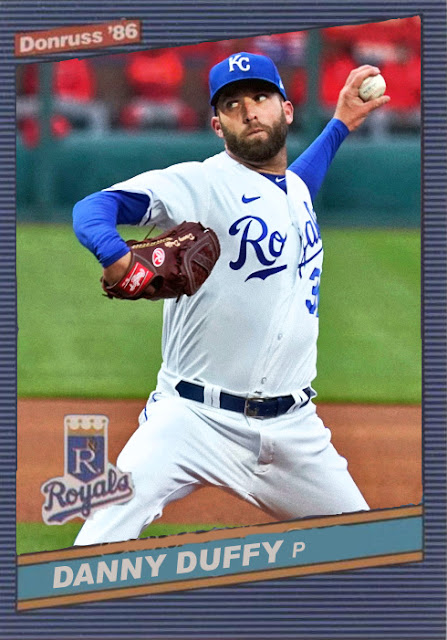 Okay. So clearly the Royals' bubble has burst a little bit since last month. They're now back below .500, they've lost 9 straight, they've lost most of Michael Taylor's punch, and they're now sort of reverting back to where people thought they'd be this year, circling third and kind of out of the relevancy district of the AL Central. Which is fine, the season's a marathon and they could always come back up in the next few weeks, Matheny has attempted worse.

And yet...the one detail of this team that hasn't reverted, aside from the usual standouts like Whit Merrifield and Salvador Perez, and also Carlos Santana...is Danny Duffy. Who is deciding NOW, at age 32, and with 10 seasons with the Royals under his belt, to have a career season. NOW. After he has less things to prove than anybody in that rotation, and after he could just coast and retire a Royal in three years. Now he's having his best season.

I mean, I'm not exactly complaining. I'm not gonna say 'hey, stop winning games and stopped with your 1.20 ERA' to Danny Duffy. He's doing a great job, this is the same sort of spontaneous fire that Jason Vargas caught a few seasons ago, and it can happen to anyone at any time. But Duffy has notched 40 Ks in 6 starts, he's leading the team in WAR by 0.6 points, and he's completely outearning the starry new additions like Mike Minor and Andrew Benintendi. Duffy, like Perez, is refusing to stop playing like a pro just because the rest of the 2015 team has sort of subsided. And I can respect that.

What I won't stand for is the rest of the team blowing things, the rest of the rotation refusing to keep runs down [especially Brady Singer and Brad Keller, I mean COME ON, GUYS], and the drop-off of both Hunter Dozier and Jorge Soler. This team felt fresh a few weeks ago, and now the big pieces are falling off. I'm not expecting HUGE things from this team, but I'd hate for the feel good Royals story to end around May. That'd just be disheartening, especially considering their scorching preseason start.

Maybe the rest of the team will follow Danny Duffy's example, and just stop giving a crap and start performing against all expectations.

Coming Tonight: Could this be this future Hall of Famer's last season? Oh, gosh, at this rate probably not.