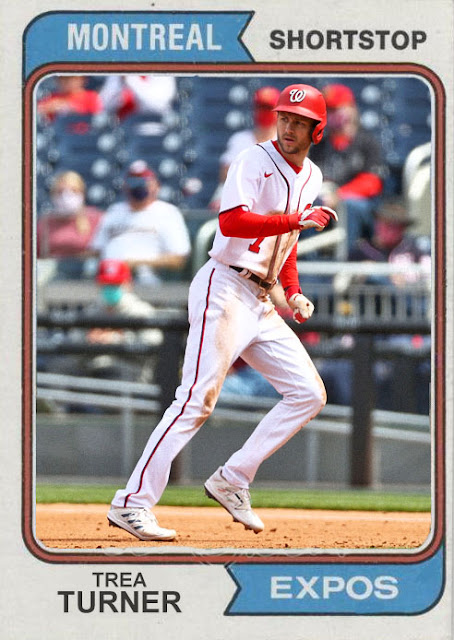 I think enough time has gone by that we should just accept the fact that the Nationals put all their focus onto winning in 2019, and that the subsequent last-place years aren't exactly indicative of a long-term goal. The Nats had failed so many times in the playoffs that they went for broke, the strategy worked, and it only worked once. And now they're just trying more long term tactics again that aren't exactly delivering another title immediately.

So, we're back to the Nats being known for having three league-caliber players, Max Scherzer, Juan Soto and Trea Turner...and not a great deal else.

The trio of Soto, Scherzer and Turner have combined for 4.2 WAR. Turner is having another phenomenal season at short, hitting .317 with a TEAM-LEADING 10 homers. Think about that. This is a team with Juan Soto, Josh Bell, Starlin Castro and Kyle Schwarber, and Trea Turner of all people leads the team in home runs with ten. That's crazy. He also leads the team in RBIs with 23, and he has 8 steals. He is delivering on his five-tool promises from his call-up in 2017, and has finally figured out how to stay healthy and be consistent, and the Nats are overjoyed. With him surging, Scherz with a 2.24 ERA at 36, and Soto hitting .287 and catching up, these three are doing exactly what they were paid to do.

Which is why it sucks that the rest of the team not being much of a factor is dragging this team down. There are some good performers, like Josh Harrison, Victor Robles and a now-bench-friendly Ryan Zimmerman, but we've restocked this team with guys who are more prone to strike out than do productive things. Josh Bell has yet to truly make an impact in Washington because he still can't hit for average. Kyle Schwarber is doing better but is still hitting .223. And the youth movement that was supposed to be more prevalent this year, people like Andrew Stevenson, Luis Garcia and Carter Kieboom, still has absolutely no room to work with all the veteran presence here.

The sagging mentality has spread to the rotation as well. Corbin and Fedde are struggling, Joe Ross had a nice start but has lost a few too many, and Strasburg and Lester need to catch up while also being careful not to get injured again.

The NL East is still relatively up in the air, but seeing as next month is the same month where the Nats started killing it 2 years ago, I'm not sensing that a similar slam to brilliance is going to happen again this year, outside of those 3 central players.