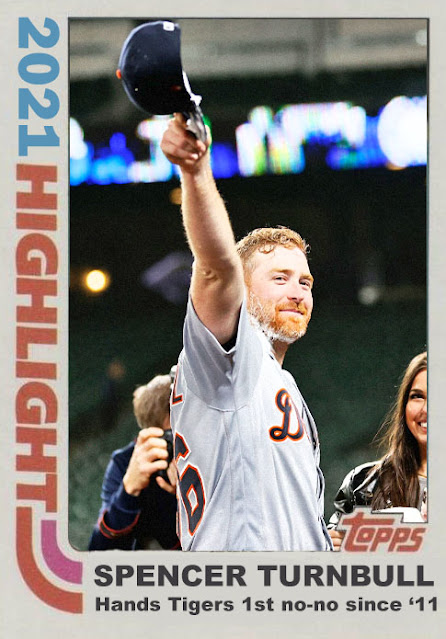 I did not expect this 82 Highlights subsets to just be a running tally of every no-hitter we've had thus far, but I'm certainly not complaining.

I mean, you can attribute it to the deadened balls, you can attribute it to the swing-for-the-fences-or-nothing mentality in batters, but the rise in no-nos is definitely benefitting the pitchers you don't always think about. Spencer Turnbull is a nice pitcher who's had some good seasons for the Tigers, but he hasn't had a true legitimate star moment yet. Of course, that no-no might be it.

I was watching the last inning, and I got very worried when Kelenic got on base in a fielder's choice, mostly because I wasn't sure if that broke up the no-no technically or not [fielder's choice isn't a hit, so no]. But the last strikeout, and Turnbull's reaction, cemented it. No technicality was gonna stop him from bringing a no-hitter to Detroit for the first time since Verlander. I respect it.

Congrats to Turnbull and the Tigers. Once again, these are fun, so I'm not gonna be mad if we get another one soon.