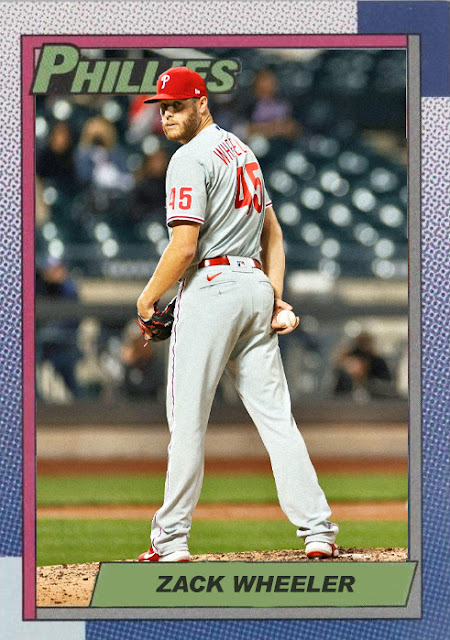 Phils are in first? How about that.

Kinda funny that the second Jacob deGrom skips a start, the balance of power in the NL East shifts entirely. The Braves get hot and start hitting grand slams all over, and the Phils start winning games and climb back to the top of the division again. I'm not saying any of this is permanent, and knowing the Phillies it probably won't be, but it's just funny.

The whole trick to the Phillies right now is that you have a 60% chance of facing a really damn good starting pitcher, and you have a 50% chance that Chase Anderson or Vince Velasquez will have a random on night. And in that past week, those two have been alright in addition to Nola, Wheeler and Eflin. And in case there was any doubt, that starting hydra of Nola, Wheeler and Eflin is the top WAR earner on the team right now. JT and Harper come close, but...with how those 3 are doing right now, it's hard to top them. Nola's at 3-1 and has 49 Ks, Wheeler pitched a CG gem with 8 Ks to add to his 2.83 ERA, 3-2 season. And Eflin has a 3.49 ERA and the least to show for his fine numbers right now, but he's right there with them.

The lineup has also improved since the addition of Nick Maton covering for Jean Segura, and since Didi and Bohm have started hitting. The centerfield issue is still very much that, and Mickey Moniak and Odubel Herrera's piss-poor average can only do so much to circumvent that, but you never know what'll click into place soon enough.

My one worry with this Phillies team right now is our recent win margins. We've won 6 of our last 10, but those wins have been extremely close, and most times they've been strong leads cut down by the same bullpen issues we've been dealing with for a while. Yesterday was a nice win, but the only runs were scored by Alec Bohm. And that 2-0 lead was enough to hold, which isn't always gonna be the case. You saw the Brewers cutting leads down and getting to our bullpen because they're an actual good team and our bullpen still has holes. Neris, Coonrod and Alvarado are good, but with Bradley hurt and Romero and Brogdon struggling, we've sort of leveled ourselves to where we were last year, which isn't good.

So hopefully the bullpen improves somehow and the Phillies find a way to sustain what's working and funnel that to what's not. Because as human as the Phils are so far, they are very close to good, and I hope they don't stray too far from it.

Coming Tomorrow- For a good week or so in 2018, he was a surefire phenom of the future. It took three seasons, but he's finally healthy again. A lot has changed.