Today, we reach the 200-card-marker of this set. I've been plugging these in since February, and now in early May we get to card 200. Not bad at all. Hope you guys are still enjoying the set.

Here are the next 9 cards, including the hero card. 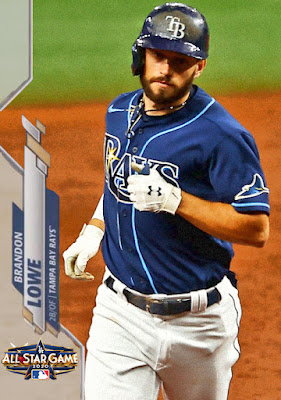 In a season where D.J. LeMahieu, Cesar Hernandez and Nick Madrigal all would have racked up votes, Brandon Lowe would have been the starting 2nd baseman of the AL team if the 2020 All Star Game had happened. Putting the 2020 season into context, it shouldn't be much of a shocker- Lowe had an incredible sophomore season, being among the chief difference-makers for the Rays, and leading them to a World Series. While Lowe's numbers have been a bit more human so far, he's still healthy and relatively reliable right now in a slightly thinner roster climate. 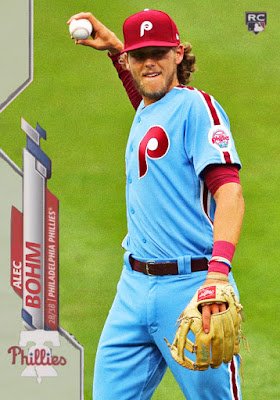 Card #200- Alec Bohm, Philadelphia Phillies
Phillies fans had been waiting a few years for Alec Bohm to hit the majors, especially after his impressive minor league numbers in Lehigh Valley and Reading. Midway through the 2020 season, Bohm hit Philly, and in 44 games, hit .338 with 23 RBIs, finishing 2nd in the Rookie of the Year voting to Devin Williams. He established himself as a strong option at third almost immediately, and gave the fans confidence that is fraying now that Bohm seems resigned to hitting around .200 this year. 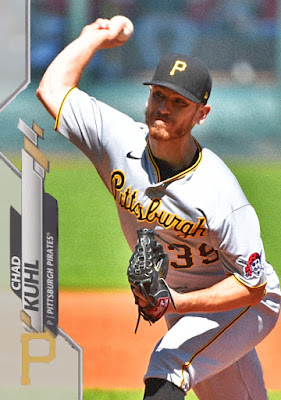 Card #201- Chad Kuhl, Pittsburgh Pirates
Yeah, no Chad Kuhl card in 2020 Topps. I know. Kuhl missed 2019 with Tommy John surgery, returned to the rotation in 2020 as a strong enough option, pitched a 4.27 ERA in 9 starts with 44 Ks, and was one of the more consistent players for the Pirates last year. He was given a high ranking in the rotation this year, and he's currently on the IL. That is the exhilaration of Pirates baseball for you. 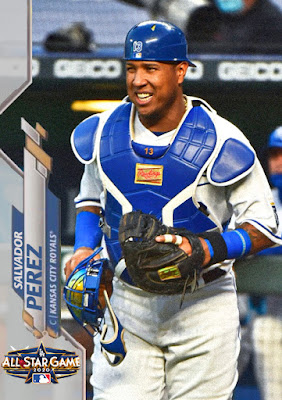 Card #202- Salvador Perez ASG, Kansas City Royals
As Salvador Perez continues to be one of the most consistently-excellent catchers in the game, the 2020 All Star Game would have been his seventh, as well as his triumphant return. The best part is that the year of injury did nothing to dull Perez' abilities, as 2020 was still a very strong year for him, with his 2.1 WAR being very much on par with other recent numbers. Perez has been doing well this season so far, and hopefully he'll get his ASG moment this year. 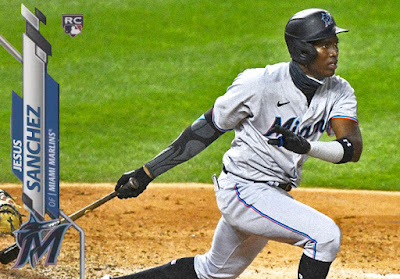 Card #203- Jesus Sanchez, Miami Marlins
One of the SEVERAL youngsters the Marlins called up during the 2020 season, Jesus Sanchez was called up specifically to aid the team after Starling Marte's injury. Sanchez took Marte's place, and only hit .040 with 11 strikeouts and 2 RBIs in that 10 game period. For those reasons, Sanchez is still currently in the minors. 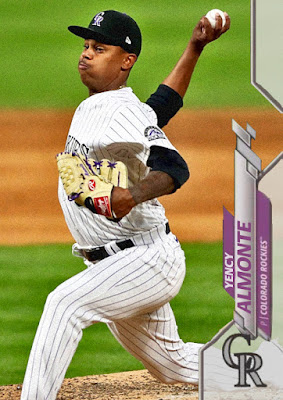 Card #204- Yency Almonte, Colorado Rockies
Yency Almonte might have been one of the Rockies' best bullpen pieces of a very forgettable year. Almonte appeared in 24 games, and hit a 2.93 ERA with 23 Ks and 3 wins. Almonte was used in middle relief as well as a final-out man, getting his first save as well last year. So far in 2021, his WAR is negating the entirety of his 2020 earnings in that category. 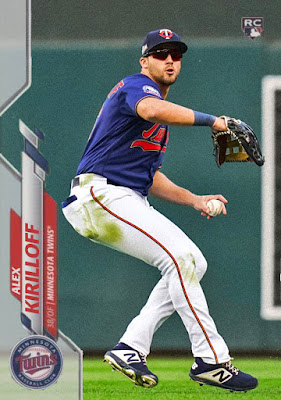 Card #205- Alex Kirilloff, Minnesota Twins
One of the more intriguing prospects heading into the 2020 season, Alex Kirilloff saw no major league playing time last year, but was added to the postseason roster before playing a single MLB regular season game. That says everything you need to know about how confident the Twins are in Kirilloff. Granted, Kirilloff only hit .250 in 4 postseason at-bats, but he still had a postseason hit before any of his 2021 regular season hits. He's currently a decent offensive piece for the Twins, and while the 2021 Topps rookie is a lot more practical, this one could have been cool. 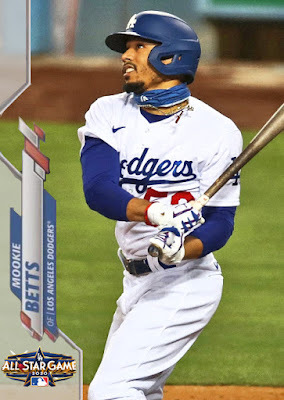 Card #206- Mookie Betts ASG, Los Angeles Dodgers
Third 2020 ASG starter in this post. Lowe, Perez and Betts. For the first time, though, they wouldn't all be starting for the same team, as Betts would have taken an NL start in 2020 for the Dodgers. I don't think anyone would dispute Betts' starting outfield position in a supposed 2020 ASG, especially considering his red-hot numbers and high MVP vote-getting. 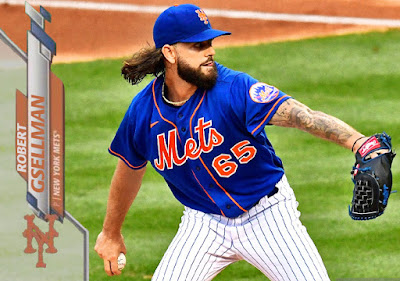 Card #207- Robert Gsellman, New York Mets
Robert Gsellman haș been one of three indispensable Mets relief arms for the past few years. With him, Seth Lugo and Jeurys Familia, the Mets have just needed to build around the core. Gsellman had an alright 2020, being utilized in a starting role and finishing with a 9.64 ERA, but he's been returned to the 'pen for 2021 and is working on a lower, sub-4 ERA so far.

Friday brings the next 9 cards in this set. A few important player omissions, a few amusing rookies, and a very big 'what could have been'.