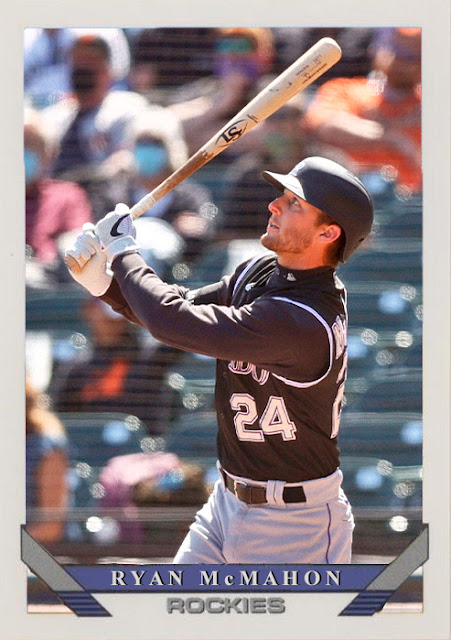 2018 was supposed to be the year of Ryan McMahon. After a quiet call-up in 2017, the Rockies would be starting McMahon in the 1st base position after the departure of Mark Reynolds. They had tried something similar with an Opening Day start for Trevor Story, and it'd worked very well for him, so all eyes were on McMahon to make a similar big splash out of the gate.

It didn't happen. McMahon hit .232 with 19 RBIs in 91 games in 2018. Ian Desmond was given the position, followed by Daniel Murphy. McMahon would be used as a backup infielder and eventual 2nd base piece.

It's now 2021, McMahon has been given the 2nd base gig in Colorado, and NOW is the part where he starts hitting like hell. McMahon hits 8 home runs in April, at one point being tied for the leaders in the NL. He also has 21 RBIs, more than he banked in that entire blasted 2018 season, and he's hitting .272, his highest average to date. Meanwhile, while Trevor Story is hitting .304, he only has 4 homers. The power has shifted.

In fact, power hitting is coming from some new and different sources so far in Colorado. Dom Nunez, the new starting catcher, currently has 5 homers, as does C.J. Cron, who seems to have acclimated to this haven for power hitters quite well. Chris Owings managed 3 triples in 7 games before succumbing to an injury that's gonna keep him out for a bit, and even supposed contact wizard Raimel Tapia is hitting homers. Maybe it's the Denver-ness, but a lot of this team is really beginning to pop.

It's obviously not a perfect team, and there's still the matter of German Marquez, Austin Gomber and Chi Chi Gonzalez struggling to keep runs down [all while Jon Gray excels once again]. And while the core of the bullpen is strong, the further out you go, the more inflated ERAs you run into. So I can see why the other 4 teams have easily lapped this one.

But there's still a nice amount of intrigue going on here, and with McMahon having a strong April, it's good to know that pretty much anybody can snap into greatness in Denver this year.

Coming Tonight: Yes, John Means is the Big Oriole of yesterday [a Season Highlight card is forthcoming], but the best Oriole right now is some outfielder guy.