The next 9 cards in the set actually have some that would have really meant something foreshadowing the 2021 season. I planned this set to just be a picture of the rest of the 2020 season, to catch everything left before it all scattered again. So for a few of these to be forerunners for exemplary 2021 seasons is slightly gratifying, I think. On with them, 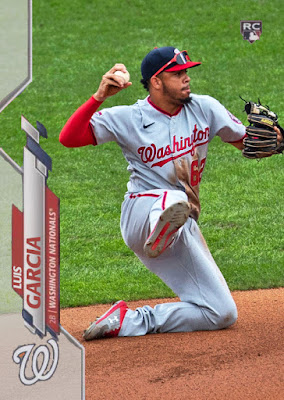 Card #235- Luis Garcia, Washington Nationals
As September brought the numbers of Andrew Stevenson to a depleted, non-competitive Nationals team, it also brought the infield bat of Luis Garcia, soon to not having to hide behind as many aging contract players. Garcia had 16 RBIs and 2 homers in 40 games, and had 37 hits in this period. While he wasn't very high above replacement level, he made a name for himself as a young, homegrown talent that would succeed several departing contracts. Garcia is currently in the minors, stuck behind Josh Harrison and Trea Turner. 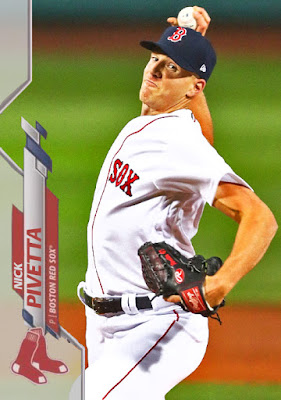 Card #236- Nick Pivetta, Boston Red Sox
In hindsight, this move by Matt Klentak may have been one of his dumbest yet. After a few rocky, disappointing seasons from former Phillies standout Nick Pivetta, Klentak decided that Pivetta would be a nice trade piece to include in exchange for relievers Heath Hembree and Brandon Workman. The result? Hembree and Workman added to the Phils' relief woes, and are now both having improved seasons in healthier environments [Cincinnati and back in Boston]. Meanwhile, Pivetta would impress over both of his starts in Beantown, with a 1.80 ERA, 13 Ks and 2 wins. As reward, Pivetta would get a spot in the 2021 rotation over fellow last-quarter favorite Tanner Houck, and would impress mightily, with 5 wins and a 3.16 ERA in 8 starts so far. I hate to say it, but being traded out of Philly may have been the best thing to happen to Nick Pivetta. 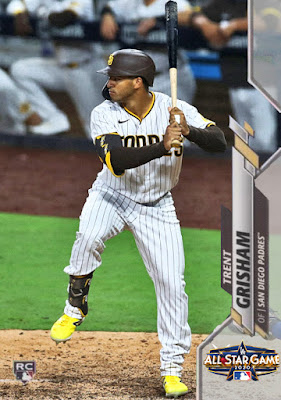 Card #237- Trent Grisham ASG, San Diego Padres
Which is similar to what I'd say for Trent Grisham. Before the 2020 season, Grisham was backing up Christian Yelich in Milwaukee, and then he gets traded for Eric Lauer and becomes a fan favorite quickly in San Diego, as the Brewers quickly run out of outfielders. Grisham's 2020 season would have made him the starting centerfielder for the NL All Star team, against all odds. Considering that Grisham is still one of the top Padres performers even in 2021, it wouldn't be too far off to see him as an All-Star in the supposed 2020 ASG. 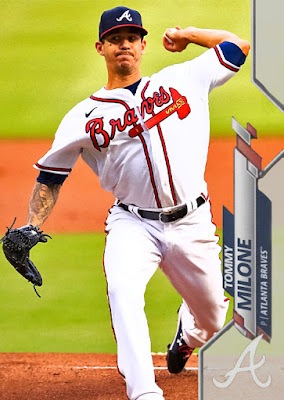 Card #238- Tommy Milone, Atlanta Braves
We seem to have happened upon a theme of disappointing trades here. Tommy Milone got off to a decent start in Baltimore, and was being relied upon consistently as a starter for the first time since 2015. The Braves saw a rotation need in Milone, and traded two minor leaguers for him. Milone made three starts in Atlanta and his Baltimore luck did not hold, with a 14.90 ERA and 16 earned runs. Here, Milone wound up on the IL, and was not of use for the remainder of the season. Enter, of course, Kyle Wright and Bryse Wilson. Milone, for the record, is healthy again, and pitching for Toronto...in a mostly-relief role. 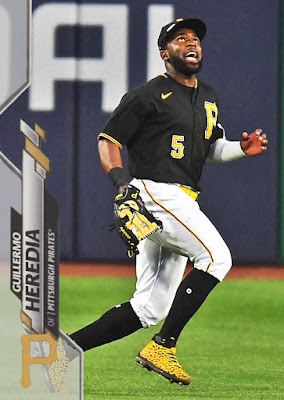 Card #239- Guillermo Heredia, Pittsburgh Pirates
Considering what a turnaround Guillermo Heredia is having right now in Atlanta, I feel as though he may want most people to forget about his 2020 season, despite the fact that I have given him two different cards in this set, commemorating both teams he played for. You've seen the Mets one, now here's the Pirates one, the team that signed him to start the season. In 8 games in Pittsburgh, Heredia hit .188 with only 3 hits and 2 RBIs, and was injured soon after. Once he recovered, there was no room in the outfield for him, and he was promptly sent to the Mets. So yeah...thankfully he's gotten better. 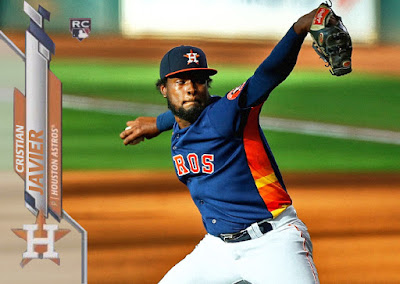 Card #240- Cristian Javier, Houston Astros
I've already talked about Framber Valdez, out of the trio of homegrown young arms shaping up the Houston rotation. Now let's move onto the newer member, Cristian Javier, who burst onto the scene last year after making a few relief appearances and shifted into the rotation. In 10 starts, Javier posted a 3.68 ERA, a 5-2 record and 48 Ks, which certainly put him on everyone else's radar. He also notched 13 postseason strikeouts, and was dominant until the Rays got to him. 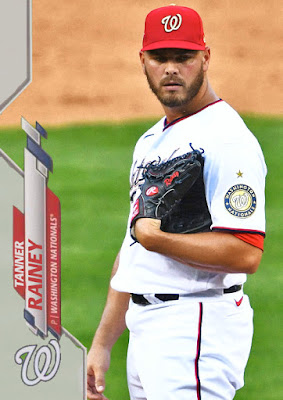 Card #241- Tanner Rainey, Washington Nationals
Tanner Rainey has become one of the few consistent relief options for these current Nationals teams. After having a strong year with them in 2019, World Series ring and all, Rainey took it a step higher and had a 2.66 ERA in 20 games with 32 Ks, keeping the opposing offenses at bay for a less-than-stellar Nats team. Unfortunately, Rainey has struggled so far this season comparatively. 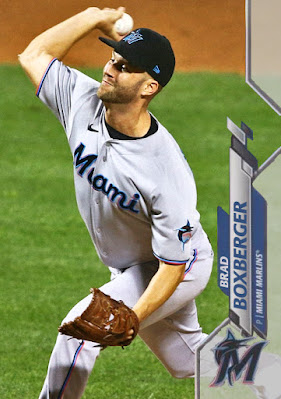 Card #242- Brad Boxberger, Miami Marlins
Brad Boxberger did lead the league in saves in 2015, but he hasn't let that define him in recent years, and has just been focusing on being the best relief asset he can be in whatever situation he's thrust upon [Steve Cishek has a similar approach]. Last year he returned to the state where he came to glory, only for the NL-based Marlins, and performed decently in middle-relief. In 20 games he had a 3.00 ERA, and was hitless over 3.1 postseason innings. He's currently bringing similarly consistent numbers to Milwaukee and their mega-pitching staff. 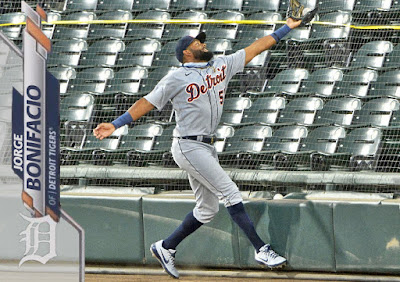 Card #243- Jorge Bonifacio, Detroit Tigers
After several seasons of diminishing returns following his power-heavy 2017 debut, Jorge Bonifacio was finally cut by the Royals following the 2019 season. Luckily, he was soon picked up by the division rival Detroit Tigers in an attempt to ingratiate him into the pool of fellow youngsters. It did not work. Bonifacio hit .221 in 30 games, with 17 RBIs and his weakest WAR yet. To date, he is still a free agent.

Next 9 on Friday. We get a hero card number, a few fun relievers, and two comeback stories that would have been great if they appeared in 2020 Topps Update.