El Bombi, Out of Nowhere 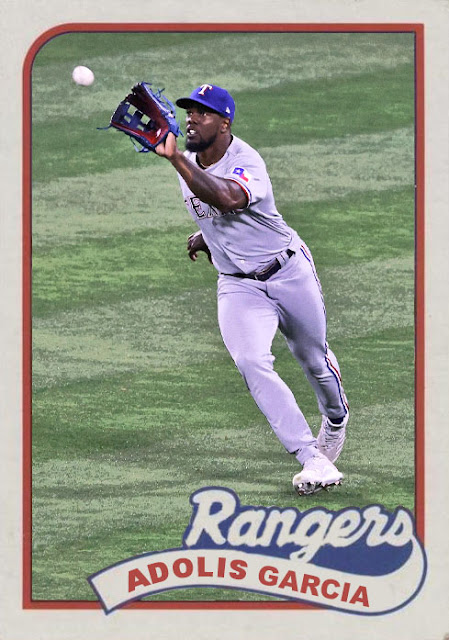 Look, I'm just happy that they got Adolis Garcia out of St. Louis.

The Cardinals have been doing that a lot lately. They've had a ton of hard-hitting, excellent prospects that they've kept within the roster and brought up as their own, but their farm system has been so good that they've had the same amount of players go to other teams. There's obvious ones like Luke Voit, Carson Kelly, Marco Gonzales, Luke Weaver, and the big one being Randy Arozarena. And then every once in a while, a new one trickles out.

And Adolis Garcia was kind of forgettable in his 2018 call-up with the Cardinals. It was similar to Magneuris Sierra the year before, who did okay in the majors before being traded for Marcell Ozuna. Garcia hit like .118 in 2018, no homers and 1 RBI. Then the Cardinals don't use him, ship him to Texas for nothing, and the Rangers struggle to find a place for him.

And suddenly, once Khris Davis got injured and Shin-Soo Choo decided to return to Korea...a spot opened up in the Rangers lineup for a power-hitter. And Adolis Garcia took it.

The man affectionately referred to as El Bombi has hit 14 home runs for the Rangers, which is I believe a league height, and it's all the more impressive when you realize that these are Garcia's first career homers. For someone to burst onto the scene in a starting position and immediately become one of the foremost home run hitters this season says a lot about the 'swing-for-the-fences' mentality of modern baseball, but it also says a lot about Garcia's abilities that the Cardinals weren't waiting to show up.

Right now, Garcia has more home runs than two famous home run masters, Khris Davis and Joey Gallo, combined. He has the third-highest WAR in Arlington, behind Kyle Gibson and Isiah Kiner-Falefa, and he's been the game-saving hero of several recent Rangers games, including a crucial one during a series with those pesky Astros. Garcia is helping keep the Rangers out of last, and even if there are definitely some big flaws with this team [the back half of the rotation, for one], this has been a much more exciting stretch for Texas, and for Garcia.

I sincerely hope he keeps it up. Someone needs to keep attacking Astros pitching, and it's nice whenever it's someone like him.