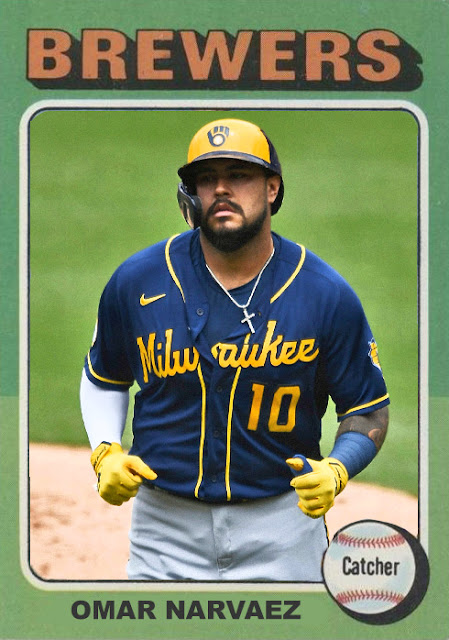 Okay, the lineup-heavy approach has been shifted. Now the Brewers have become a 'let's just strikeout the other team into submission and hope we somehow outscore them' sort of team. Which...I guess works.

Having Corbin Burnes, Brandon Woodruff, Freddy Peralta, Adrian Houser and Josh Hader all on at once is a dangerous combo for the rest of the NL Central, and so far the pitching has been the highlight of Brewers baseball this year. Burnes only recently gave up his first walk of the season, Peralta and Woodruff have 61 Ks each, and even the surprisingly tight bullpen, featuring Hader, Eric Lauer, J.P. Feyereisen, Brent Suter, Brad Boxberger and Devin Williams all pitching well, has been aiding things. Only Houser seems to have given up a great deal of runs so far. I'm glad the Brewers have figured out the pitching situation, because this had been a few years of trial and error in the making.

Unfortunately, now that we've gotten the pitching sorted out, now the lineup needs work. Yelich is hurt, Hiura is back in the minors after not hitting, the fun bench infielders like Daniel Robertson and Jace Peterson are both injured [robbing the team of depth], and giving starting roles to Billy McKinney, Luis Urias and Dan Vogelbach have illuminated how much of a skeleton crew this team has become.

At the very least, Omar Narvaez is having another strong season behind the plate, and is hitting pretty well for himself [.347]. Kolten Wong and Avisail Garcia are also hitting well, for power and otherwise, and Tyrone Taylor is beginning to come into his own. But the reality is that the homegrown quality of this lineup has completely vanished. Keston Hiura could still come back fine, but with the departure of Orlando Arcia, this team became more about who is around and signed here, and less about who actually came up and can help things.

Right now, the entire lineup is made up of people from other farm systems. I said this about the Mariners last year and then they brought up Evan White, Taylor Trammell and Jarred Kelenic. Tyrone Taylor is a Brewers product, but he's also not really a starting piece yet. So until they bring up, like, Bryce Turang or whoever's the next big prospect...I don't know if I can really get behind this lineup. It's not theirs. Lorenzo Cain is really the only other Brewers farm product actually trying, but he barely counts because he was one of the many Brewers farm products traded away in the last 10 years.

Again, at least the pitching's doing well right now. At least there are good performers. But I still worry about the Brewers' identity and farm system dilution.

Coming Tonight: 11 homers, 40 strikeouts. What can't this man do, besides be on a competitive Angels team apparently?