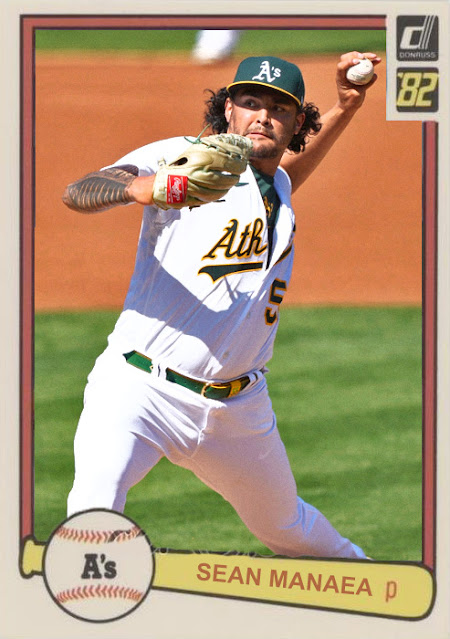 I admire the tenacity of these Oakland Athletics. Start the season with 6 straight losses, then win 13 straight games. Burning the candle at both ends. Catching my attention no matter how they spin it.

And right now, the A's are in 1st place, have the 2nd-best record in the AL, are still maintaining a good piece of their mid-April momentum, AND they're coming off of a Sean Manaea start that nearly became Friday's second no-hitter.

Heck, those 7 innings were the biggest indicator that Manaea is back now, cause it's been a rocky few years. He was out for most of 2019 with injuries but was activated in time for the playoffs. Then he was a bit too unstable in terms of ERA, and things didn't look great for him last year. But now? 7 starts in and he's back in his prime, with a 3.07 ERA, 43 strikeouts and 3 wins. Considering that Chris Bassitt took a while to bring his ERA down, Frankie Montas is struggling and Mike Fiers and Jesus Luzardo are both injured, having a competent, ace-caliber Sean Manaea is exactly what the A's need right now. Cole Irvin's also a decent rotation piece, though he struggled a bit today against Tampa.

And considering that the rotation's in a decent place, the bullpen is pretty tight [look at Yusmeiro Petit go!], and we're finally getting offensive production from Matt Chapman and Sean Murphy, the A's could be a 1st place team for a little while. Like, you could guess the big highlights of this roster [yes, it's Ramon Laureano, Mark Canha and Matt Olson again], but guys like Seth Brown and Jed Lowrie are surprising people, which is nice. And while there are some places where there could be a biiiit more offensive production [Mitch Moreland and Elvis Andrus still aren't hitting], this is still a pretty strong team overall.

And as the Angels plummet further and further out of the conversation, the Astros duck back under .500, and the Mariners' old habits catch up to them, the A's may be one of the few sure bets the AL West has right now. I sincerely hope this continues, then.

Coming Tomorrow- You wouldn't believe who just took first in the NL West.