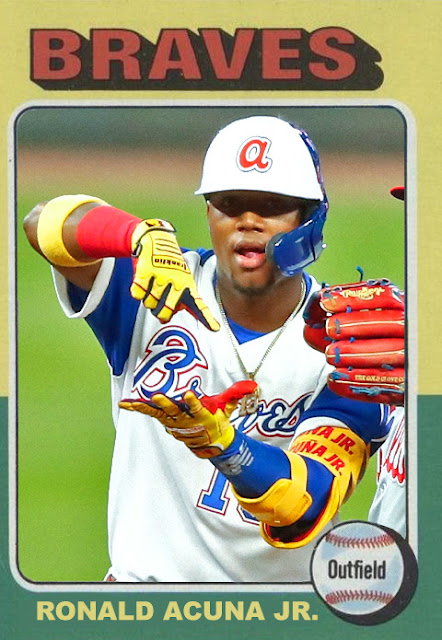 I think Ronald Acuna Jr. might be the modern answer to Manny Ramirez. One of those guys who always leaps onto the scene with an exclamation point. The difference is I like Acuna.

And I also like the Braves. They may share a division with one of my teams, but I'm certainly not gonna root against them like I sooner would the Mets. The Braves I expected to win the division this year, and they may soon ascend and take it from the Mets or Phillies. The Mets don't have a difference-maker like Acuna because Lindor isn't playing like himself, and the Phillies have Harper, Realmuto and Hoskins, but they also have shitty luck.

Right now, so do the Braves, actually. Acuna is day-today with an ankle injury, Heredia and d'Arnaud are injured, Soroka might be out for longer than expected, Fried, Smyly and Morton are all having letdown starts, and Freddie Freeman stopped hitting again. They're 3rd in the East, behind the Mets and Phils. And they just got trounced by the Blue Jays, one loss of which was witnessed by a Braves fan who only deserves good things in life.

And yet, because they're the Braves, and because this team has Acuna, Panda off the bench and the SCARLILY- ERRANT HUASCAR YNOA AT THE PLATE AND ON THE MOUND, I can't count them out yet.

First of all, the gaggle of replacement players they've been piping in haven't been half bad. William Contreras has been a decent fill-in at catcher for D'Arnaud, Ehire Adrianza has been a really strong backup infielder, the aforementioned Heredia and Sandoval, and Austin Riley has finally evolved to a strong starting third baseman with a .282 average and actual non-slanted contact numbers. This is the season people were hoping for when he came up in 2019, and it's actually happening. The rest of the lineup really needs to start hitting, but there has been some semblance of offensive production from Dansby Swanson, Freddie Freeman and Marcell Ozuna. And you also have to remember that Ynoa and Anderson are two very nice starting options, and I hope they stay healthy for as long as possible.

So the Braves, while not perfect right now, are good enough to still potentially lap the teams in control of the division. Again, they could catch fire like they did last September again. They're fully capable of it. So I'm not allowing myself to be shocked by it this year.

Coming Tonight: Why does a team with a 40-year-old home run hitter have to be a last team in this economy?