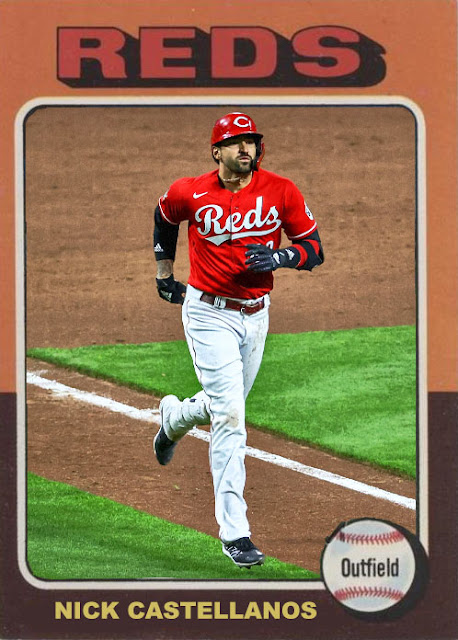 Ever since seeing the Reds at home 3 years ago, I've always wanted really good things to happen to them. They've always had fun teams, they've always gone out and gotten fun, likable players, and they have a charm to them that I can't stay mad at even if they beat my teams. Last season was a nice step up for them, and it led me to believe there'd be a small renaissance of Reds teams. 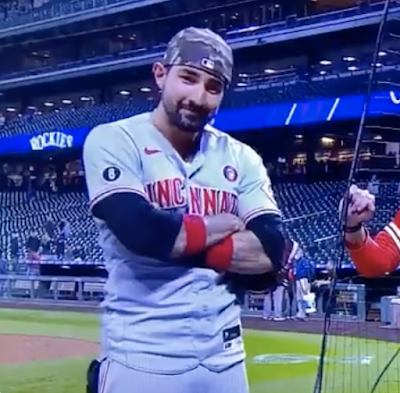 That's right. Nick Castellanos staring everything that makes baseball orderly and safe in the face, and saying no. Making the game better by doing things that the purists hate. Smashing a baseball after a fan told him to imagine it was Rob Manfred's face. Then getting said fan to say it on air and just look smug. The 2018 team may have had people like Geno and Votto, but there was nothing like this.

And that's at least what you can say about the Reds right now. They have an attitude, and they're sticking to it. Castellanos and Jesse Winker have become a formidable outfield one-two punch, occasionally joining in with Tyler Naquin for some serious RBI production. Castellanos is hitting like a monster so far, with 26 RBIs and 11 homers. He was pulling numbers like that after a month of play last year as well, and then he stopped hitting. I hope that doesn't happen again, because he's fun when he's on.

And Castellanos and Winker are sort of turning the team round from what's worked in the past. Geno is still hitting homers, but not for average. Joey Votto is still on the team, but right now he's injured and just rounding out the contract on name recognition, sad to say. Luis Castillo is struggling amongst the pitchers brought in to supplement him [Miley, Mahle, Gray]. Even Amir Garrett is off to a bad start. The team is shedding a lot of what made it fun in the late 2010s and is now trying to become a bit more of a heel team.

Which isn't...BAD. I mean, being the 'mean and nasty' team can work occasionally, and it works for the Padres in their Dodgers series'. But...I'm not sure if I'm ready for this Reds team to work this angle. I like a lot of these players, especially people like Tyler Stephenson, Mike Moustakas, Sean Doolittle and Nick Castellanos. I'm not sure if I'm gonna be alright if they really become the embodiment of Castellanos' smug, Manfred-bashing look above.

Unless they want to limit this to just Manfred-bashing. I am 100% okay with that.