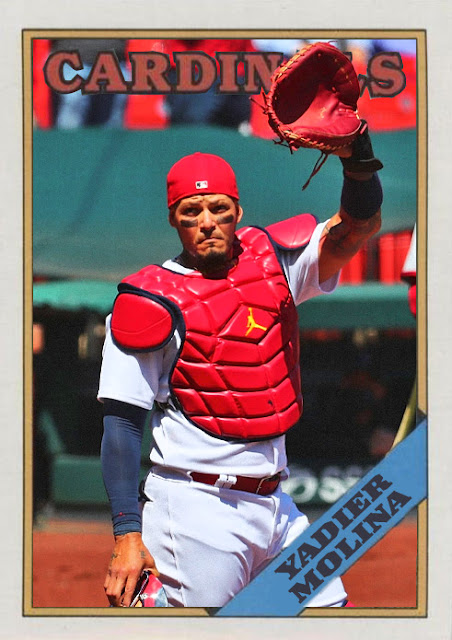 Molina's healthy and hitting .300, Flaherty's leading the league in wins, Arenado's hitting like it's Colorado, and the Cards are in first. What a horrible nightmare the 2021 season has become.

I mean, honestly, I can blame the Phillies for this one as well. The Phillies had a series with the Brewers when they were in first, demolished them, and they haven't been as competitive since. Meanwhile, the Cardinals were handsomely taking down the Pirates and Mets, regaining Yadier Molina and Adam Wainwright, and being one of the only teams in the NL Central acting like they should be in first. So here they are.

And there's lots of takeaways from this team. The big ones are Flaherty returning to ace status, Alex Reyes showing up as a huge closing piece, Dylan Carlson and Tommy Edman running the team and the Arnado-Goldy battery finally working. But, at the same time...guys, Yadier Molina's still a top-tier catcher. I mean, he's 38, he's been in the league since 2004, he's clearly a future Hall of Famer [it doesn't even need to be discussed that he's an all-timer catcher, but the two rings do help], and...he's still one of the most valuable performers on the team. He leads all players not named Goldschmidt or Arenado in RBIs, he has the best batting average on the team, and he could theoretically break 1000 RBIs this year. He's on pace, and he's hitting well enough.

And the thing that's interesting when you compare him to the other surefire HOFers right now, like Albert Pujols and Miguel Cabrera is that those two have had a severe drop-off in the last decade. There's been a whole dormant period where they can keep playing or whatever and it won't really affect their overall impact. Molina, similar to Adrian Beltre and even Carlton Fisk, is a contender and a league-talent to the very end, and he's still has good as he was in his prime right now. His defensive numbers have taken a slight hit, but he's still a reliable offensive catcher and he can still hit for average. That's the best outcome.

The Cardinals are looking extremely good right now, and could coast on this feeling for a while, but I fear that the Brewers, or even the Reds, could bite back against them, which they'll need to prepare for. I hope their core health continues, to that end.

Coming Tomorrow- Not only is he earning more than his brother in terms of value right now, but his team is about to get two pieces that could make them contenders this year after all.