The Unexpected Breakout Star of April 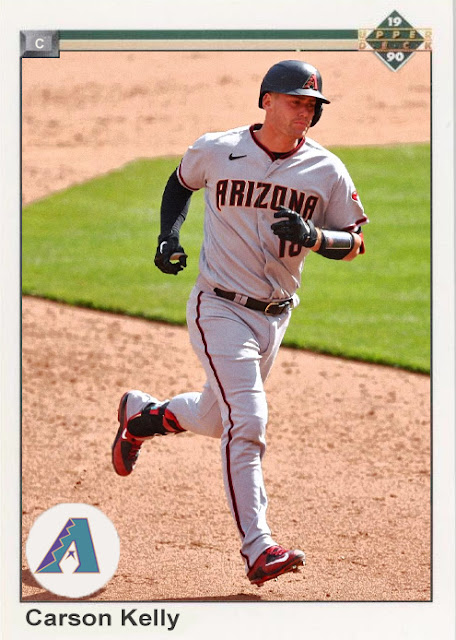 Carson Kelly has always been a strong choice at catcher for the Arizona Diamondbacks, but he's never been considered a legitimate star. Always playing adequate ball, taking a backseat to the main guns of the D-Backs lineup. Not especially a name everyone knows.

And then this year, he has one of the most inexplicably amazing Aprils of anyone in the league.

Carson Kelly, for starters, had a 1.9 WAR in April. For comparison's sake, Kelly's highest full-season WAR is a 1.6 in 2019. So if he got injured tomorrow, and I really hope this isn't jinxing anything, but if his season ended tomorrow, he'd have a career high WAR. Now he's gonna keep going and adding to that and being awesome, but one month in and the bar has already been raised.

The other numbers are just frosting but equally important- in 19 April games, Kelly hit .340 with 14 RBIs and 6 home runs, along with a 1.224 OPS. They are the best numbers in Arizona, and among the best numbers in the NL right now. Jacob de Grom leads all NL players in WAR, but Carson Kelly leads all NL position players. Not Fernando Tatis, not Bryce Harper, not Nolan Arenado. Carson Kelly. And I couldn't be anymore here for it.

It's also a great thing because the Diamondbacks don't have a ton going on this year. Right now, the other big offensive lineup pieces are guys over 30. David Peralta, Asdrubal Cabrera, Eduardo Escobar are all doing well, but the other pieces, the younger ones, are either injured or puttering around aimlessly. We're at least getting rookies like Andy Young and Pavin Smith doing well right now, as well as the recent callup of apparent heir-apparent Daulton Varsho, but the whole lineup isn't on the same page.

Same with the pitching staff, which has decent performances from Zac Gallen and Taylor Widener buttressed by disappointing stints from Merrill Kelly, Luke Weaver, and non-7-inning-no-no-caliber Madison Bumgarner. Lot of 5+ ERAs in the bullpen as well.

So as disheveled as this D-Backs team is right now...at least they're still currently playing over .500 baseball, and at least Carson Kelly is putting them over the edge.

Coming Tomorrow- We called him Nasty. He was happy to oblige.