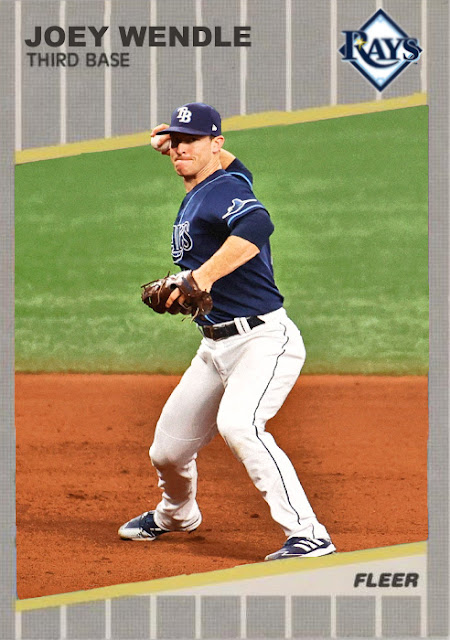 Right now, the AL East has a frontrunner, in the unstoppable Red Sox, a spoiler, in those pesky New York Yankees, and an underdog, in those fun-loving Toronto Blue Jays. So where does that leave the Tampa Bay Rays? You know...AL threat for the past two years, almost won a World Series last year? Those guys?

It's been a tricky endeavor for the Rays so far, trying to forge their identity this year without Blake Snell, Charlie Morton and Nate Lowe, all of whom are doing pretty well for other teams right now. It's also trickier considering that two of the marquee contact guys for Tampa, Brandon Lowe and Kevin Kiermaier, are struggling, and the resident power hitter, Austin Meadows, is hitting under .200 despite 7 homers. Who is the big star in this lineup, then?

Well, right now things are falling on Joey Wendle, who's been a standout infield bat since the Kevin Cash teams started rocking things in 2018. Wendle can hit for average and pack a punch when he needs to, and so far this season he's been hitting .287 with 16 RBIs and 31 hits, dwarfed only by a still-very-hot Randy Arozarena. But those two are the only people in the lineup hitting over .250. When your main battery only comes down to a 31-year-old middle infielder and a second-year hitter who hasn't really sprouted legs yet, you're in serious trouble.

And the pitching is similar. There is still a sense of this bullpen belonging to anyone, call-up or stowaway, and we have people like Ryan Thompson, Andrew Kittredge, Jeffrey Springs, Pete Fairbanks and Hunter Strickland doing well there. That mentality is also spreading to the rotation, as young homegrown pitchers like Josh Fleming, Shane McClanahan and now Luis Patino [who, fun fact, is younger than the franchise] are coming together to salvage a disappointing starting assortment. Only Tyler Glasnow has done what he's supposed to, and while Michael Wacha had some decent games before the injury, Rich Hill and Ryan Yarbrough have been a bit disappointing. So at least they're getting it together now, thanks to these kids.

The most worrying detail about this team is its anonymous nature. Who's gonna care if this Rays team starts surging led by people nobody has heard of like Wendle, Shane McClanahan and Mike Zunino? The Sox, Yankees and Blue Jays have cores led by noted team heroes who are all fulfilling their obligations. The Rays do not currently have that. So for this team to even have a chance at topping their 2020 success, they're gonna need to wake up the rest of their lineup. Cause this might not go well otherwise.

Coming Tonight: One of the few people with an animal motif in Queens who isn't infuriating people right now.