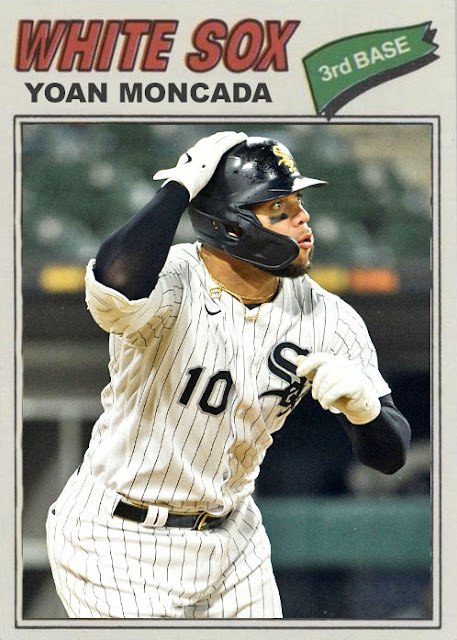 When the White Sox traded Chris Sale to Boston, they were hoping for the return package to lead to a future dynasty for them. While two of the prospects in the deal never panned out, the other two were two of the biggest prospects in the Boston minor league system in 2016 [which, let's be clear here, also included Rafael Devers and Bobby Dalbec]. And I find it very funny that both of them took a great deal of time to fully bloom in Chicago.

Michael Kopech is coming into his own as a relief piece who can start, and his strikeout/hard-throwing stuff is nasty. So while he's not a weighty rotation piece right now, mostly because of the mastery of the Lynn-Rodon-Giolito-Keuchel-Cease rotation right now, he's still in position to be a huge pillar of the White Sox pitching staff for the foreseeable future.

And then you have Yoan Moncada. For his first two seasons in Chicago, he was a major disappointment, striking out more than he got on base, landing only a 1 or 2 WAR, and setting the team's progress back further rather than cutting to the dynasty. 2019 was a masterful season from Moncada, with a 5.1 WAR, 25 homers and a .315 average. It was the stepping stone to a long, impressive career in Chicago, and if 2020 was a normal season, then maybe this excellent 2021 campaign he'd been having would be less surprising.

Right now, Moncada is the most impressive piece on the White Sox, and that includes standouts like Lance Lynn, Yermin Mercedes, Tim Anderson and Carlos Rodon. Moncada has a 2.0 WAR, is hitting .285 and has 26 RBIs. In a season where Jose Abreu's a little less pronounced and both Luis Robert and Yoan Moncada are injured, they need a rock like Moncada to keep them rolling and keep them in the race.

The Sox are in a pretty nice position in the AL Central, a few games ahead of the Indians, leveled slightly after a series with the Yankees but coming off well against the similarly-in-control Cardinals. They could still be one of the best teams in baseball by the halfway point, and hopefully their core keeps delivering great performances and seasons.

Coming Tomorrow- Oh yeah, that team they're playing this week isn't too bad, either. Their ace is having another nice year.