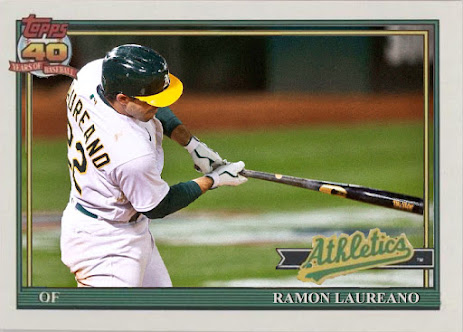 The A's are still in first, Ramon Laureano's still on a hot streak...these might be connected.

One of the best parts of this A's team is that, with the exception of Mitch Moreland, the lineup has stayed pretty damned healthy. Chapman, Olson, Laureano, Canha- all very healthy this year, and pretty damn effective. Once again, the contact duo of Mark Canha and Ramon Laureano is running this team, both hitting really well and both with 10+ homers [more than Matt Chapman!]. Laureano is still one of the best outfielders in the game, has a killer arm and a deadly bat, and is a good choice for this team to basically be formed around

We do have a good-old-fashioned 'Matt Olson hits a bunch of homers' season going on as well, too. Leads the team in homers and RBIs. This A's team can do the power thing as well, and has people like Seth Brown and Olson and the now-injured Moreland that can just mash. The only odd part is that even though Matt Chapman is healthy, but he's still only hitting .211. Yes, he's hitting for power with 20 RBIs and has a 1.0 WAR, but...the Chapman of 2019 and 2018 was more well-rounded, had better contact numbers, and felt like he could lift the team. And I worry that Matt Chapman might not get back to his 2019 heights.

I mean, look at Elvis Andrus. He was traded here in the hopes he'd return to his mid-2010s heights, and he still isn't hitting for average. Jed Lowrie is at least pulling good power numbers right now in his return to Oakland, but a return to peak Oakland numbers at this point may be out of the question. I really hope Chapman doesn't fumble things now, cause he looked so good before.

The rest of this team is less starry but still impressive. Chris Bassitt, Sean Manaea and Cole Irvin are having very trustworthy seasons in the rotation. Lou Trivino, Yusmeiro Petit, Burch Smith and Jake Diekman are all excellent pen pieces. Former Yankee farmhand James Kaprielian has been sharp in his first two starts, and could be a ROY contender if he keeps it up.

The A's are excellent right now, and are a solid, fun, rootable first place team. With the amount of momentum the Astros have been gaining lately, I'm worried they could have to fight from below again. But this A's team is no longer an underdog team to me, they're excellent, and they need to keep this high ground for as long as they can.

Coming Tomorrow- Right now, you could make the case that we have at least two, maybe three, potential Hall of Fame catchers currently at work. Here's one of them.