With this post, we reach the point where this 2020 Final Edition set has less than 100 cards left for me to show you all. I cannot believe we've really trucked through this set this quickly, but I'm intrigued to get to some more of the stuff I have left in the last 100 cards. 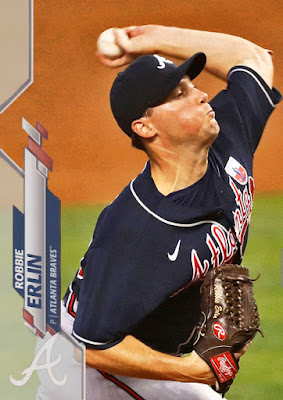 Card #226- Robbie Erlin, Atlanta Braves
As of now, the 2020 season counts as journeyman pitcher Robbie Erlin's final one, and judging by his Braves numbers, it's not the greatest way for a player to go out. True, he did get a location upgrade from the last place Pirates to the pennant-contending Braves thanks to a late-season trade, but the former Padres hurler struggled in a late-rotation role for the Braves, with an 8.49 ERA in 23 innings. For those reasons, Erlin was released in September to allow for Kyle Wright and Bryse Wilson to be a part of the postseason roster. 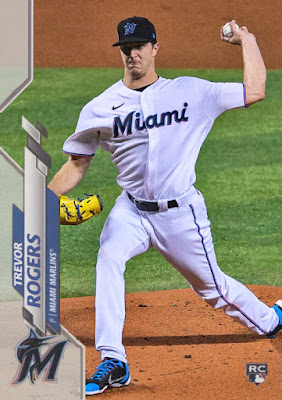 Card #227- Trevor Rogers, Miami Marlins
Ah yes, one of the bigger rookies of 2021 so far. Last year, however, Trevor Rogers was just another attempt at a starting job, in the absence of Jordan Yamamoto and Robert Dugger's better numbers. In 7 starts, Rogers struck out 39, but had a 6.11 ERA. In one postseason appearance, Rogers got beat up a bit by the Braves, as well. And yet he was given a starting nod in 2021 and has been fantastic in 8 starts, with a 5-2 record. Hopefully he keeps up the good work. 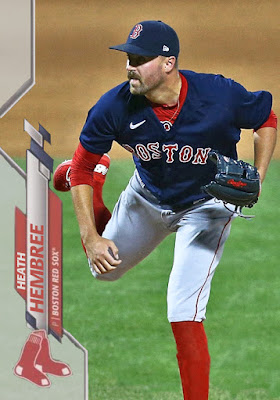 Card #228- Heath Hembree, Boston Red Sox
A few posts ago I mentioned Hembree's Phillies numbers, and how dismal they were. But let it be known that Heath Hembree, a longtime relief specialist for the Sox, was already struggling in Boston at the top of the season. Hembree had a 5.59 ERA in 11 games in Boston, so the Sox weren't exactly frightened of losing him. The good news is that Hembree is rebounding from his 2020 season very well with the Reds right now. 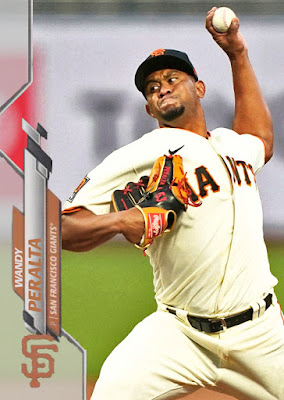 Card #229- Wandy Peralta, San Francisco Giants
Another guy in the news right now. Wandy Peralta was a Cincinnati reliever who was dealt to the Giants at the 2019 waiver deadline. In 2020, he gave the Giants some pretty strong numbers in relief, with a 3.29 ERA in 25 games, with as many strikeouts in that period. Peralta was often on-hand as a mop-up man in non-save situations, a role he was also placed into in 2021 with less success. Peralta is a big deal right now because the Giants traded him to New York for Mike Tauchman, an outfielder whose bat and heath the Yankees could really use right now considering the injuries that are attacking the outfielder. Peralta has been pretty good in the Bronx so far, but not as good as Sockman has been in SF. 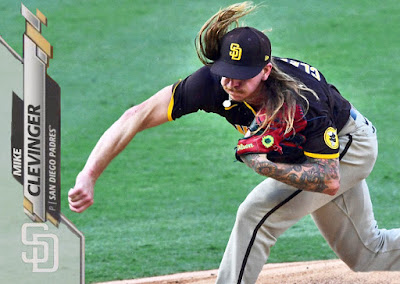 Card #230- Mike Clevinger, San Diego Padres
The golden prize of the 2020 trade deadline, Mike Clevinger was having a great season in Cleveland before violating COVID protocols to have a good time in Chicago. So the Indians, as punishment...sent him to the Padres, the most promising team in the league? Not really much of a punishment, don't you think? Clevinger started 5 games in San Diego, one in the postseason, and was pretty strong, with a 2.84 regular season ERA, and 19 Ks. Only problem is the fast-throwing Clevinger was wearing out his arm, and would need Tommy John surgery after the season. The Padres have him signed til 2022, so they'll get one strong season out of him, at least, but he's not gonna see any time in 2021. 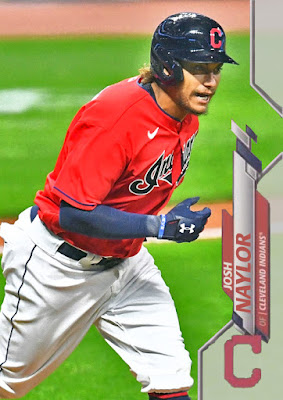 Card #231- Josh Naylor, Cleveland Indians
One of the San Diego players dealt in exchange for Clevinger was Toronto's own masher Josh Naylor, who immediately went to work to prove himself worthy of a starting spot, which he failed to do even in a DH-friendly Padres season. But Naylor fit the Indians' mash-mentality a lot more, with 14 hits in 22 games. The postseason, though, is where Naylor came to life. He only got two games, against the Yankees, to make a name for himself, but with a .714 average with 3 RBIs and a homer, plus 5 hits overall, he definitely gave the Yankees' pitching some scares. So far he's on the right track as a power hitter as well this season. 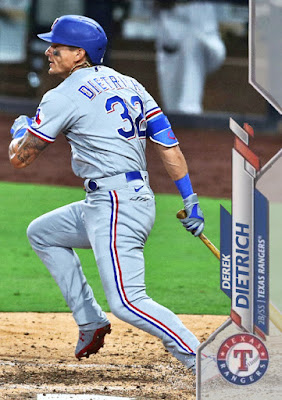 Card #232- Derek Dietrich, Texas Rangers
After finding fame as an everyman super-ute in Miami, Derek Dietrich shifted to an all out power bench bat in Cincinnati in 2019. After being cut by the Reds out of camp, Dietrich laid low until the Rangers came calling, and by early August he was up and playing in Arlington. In 25 games he only hit .197, but had 8 RBIs and 5 homers, which was enough one-dimensional power for a very blah Rangers team last year. Dietrich tried to make camp with the Yankees this year, but he was cut in favor of Jay Bruce, and we all know how well that turned out. 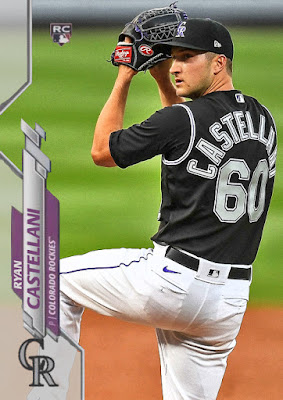 Card #233- Ryan Castellani, Colorado Rockies
In the absence of Tim Melville, the new young inexperienced Rockies starting auditione was now Ryan Castellani, the longtime farmhand who'd been in the system since 2014. Castellani started 9 games and had the usual acclimation period in Denver, with a 5.82 ERA and 4 losses. He's already been called upon for a start this year, but since the Gray-Marquez-Senza-Gomber-Gonzalez rotation has been solid otherwise, he's already been sent down. 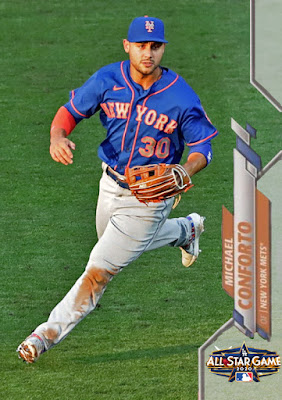 Card #234- Michael Conforto ASG, New York Mets
In a 2020 season where the All Star Game had been played, Michael Conforto would not have gotten the start in right due to Mookie Betts' incredible start, but he definitely would have made the team and gotten some playing time during the game. Last season was another strong one for the contact-hitting outfielder, and Conforto has become one of the perennial stars to watch for the Mets. So far he's not exactly on his A-game at the plate, but the season is young.

Next up are 9 more cards on Monday, including some of the biggest stories of 2021 foreshadowed last year.