This Trade Sort of Makes Sense...But Why NOW?? 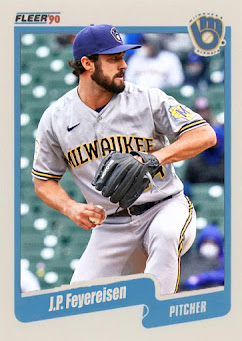 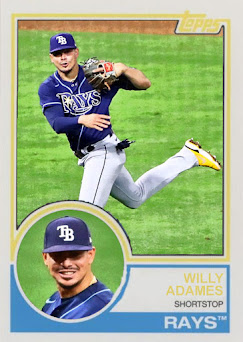 Well...the floodgates of the 2021 trade season have opened. And, on one hand, it's early enough to make it into Topps Update this year, I believe [assuming, wrongfully, that 3/4ths of these pieces will have Flagship cards to begin with]. But on the other hand...it's mid May and two competitors are dealing big pieces like this?

Okay, here's what we know. Right now, the youth movement and core are doing well enough for the Tampa Bay Rays, though the three-or-four-year guys, like Willy Adames, Kevin Kiermaier, Brandon Lowe and Mike Brosseau, are struggling so far this year. The pitching in Milwaukee is among the best in the league, rotation and bullpen. The Rays bullpen was fantastic in 2018 but has since become a shell of its former self and is now more of an all-comers normal bullpen. And the Brewers have struggled mightily at shortstop even after trading Orlando Arcia.

Also, it was aware that Willy Adames was beginning to have a line behind him at shortstop in Tampa. Most notably, Wander Franco is waiting in Durham, along with Taylor Walls. You also have Xavier Edwards, a prize from the Tommy Pham trade, currently injured but also a very valid choice at short.

So, Willy Adames being traded to Milwaukee is not the maddening part of this trade. It's actually the only figure that makes sense.

I can even say that trading Trevor Richards was also a great idea. Richards had absolutely no room to start in Tampa, after being a decent starter in Miami. He's been pretty much underused and misused in his 2 years in Tampa. The Brewers may not exactly have a rotation opening, but they could always use him in the pen as a long man and work him back up. So, again, the Brewers will succeed with Richards, the Rays will succeed without him.

It's the Rays acquisitions that I do not get.

As I stated, the Brewers have an excellent pitching staff and a great bullpen. Despite the recent downturn in the standings, and bobbling around .500, they still have a great bullpen that's just seeing ERAs go up a bit. J.P. Feyereisen is an unmistakable talent and strikeout artist, and was already making a name for himself as a premier relief specialist. Drew Rasmussen is also a key figure in this bullpen, has finished 7 games, and leads all non-Hader relievers in Ks. They are two big pieces of an excellent bullpen that could still compete in the very-tight NL Central.

So...why the hell do you trade them to a fellow competitor? How badly do you need that shortstop?

I mean, not only does this set the Brewers' pen back a bit, especially in comparison to the Cardinals' and Cubs' bullpens, who are doing better now...but it improves the quality of the Rays bullpen, which just lost Hunter Strickland and was in danger of losing its identity. The one thing you do not want to do with a bullpen that is capable of being unstoppable is give them more indispensable tools to work with. This is the mistake the Marlins made in trading Nick Anderson over there in 2019, and Feyereisen and Rasmussen could be equally important figures to the Rays this year.

The Brewers should not have started selling now. Getting Adames is a good priority, yes, but it shouldn't have been worth two pieces that would have aided them in the division race. Why do this in May rather than in July? Why assume that A.) the rest of the season won't really rely on having a completely great bullpen, or B.) two more pieces are going to miraculously fall into place and keep the bullpen in line?

Now, am I as miffed about this as I am because the Rays are probably going to get stronger, heading into the heat of a 4-team brawl for first with my Yankees? Probably. But even taking my bias out of it, it doesn't seem like a great move for the Brewers, even if Adames comes back alive given this lineup.

Maybe it'd make more sense if I were a GM. But as is right now, it's a little bit confounding to me.