Heading further into the 200s with this post, for the Final Edition set. A few of these set up the 2021 season, while a few more set up developments that have since been halted. 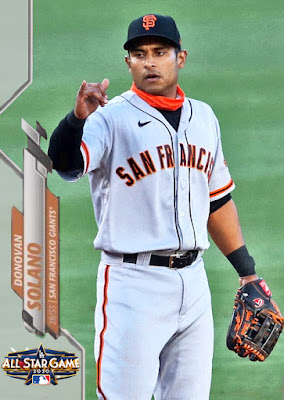 Card #208- Donovan Solano ASG, San Francisco Giants
The man now affectionately known as Donnie Barrels would have been the starting 2nd baseman of the NL team had the 2020 ASG happened. It would have been a winning, surprise moment for the longtime journeyman infielder, who'd came up with Miami years ago and never found a true niche until he got slotted into a starting position in 2019. Two straight years of .300+ averages later, Solano was a fixture, a silver slugger winner and a Giants hero. Before his 2021 injury he was hitting .300, so he's still definitely league-caliber. 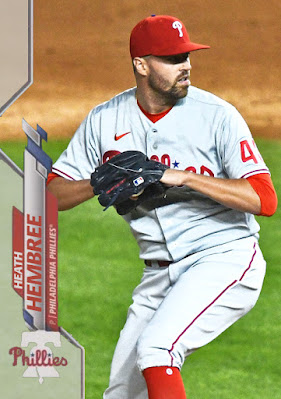 Card #209- Heath Hembree, Philadelphia Phillies
Heath Hembree was one of two Red Sox relievers traded to Philly to save the sinking rotation, only to get pulled into the wreckage themselves. Hembree had the worst shake of anyone, seeing his already-bad 5.59 ERA sink to a 12.54 in Philly. He's thankfully pitching an improved 0 ERA in Cincinnati, so maybe it is just Philly that brings out the worst in people. 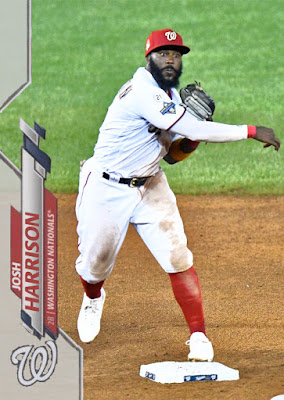 Card #210- Josh Harrison, Washington Nationals
Speaking of Philly bringing out the worst in people...the Phils signed Josh Harrison to a minor league deal for Spring Training [this DID get a Topps card], and both the pandemic and the tight 2nd base race led to Harrison being cut. So then the Nationals pick him up prior to the July start to the season, and then Harrison improved even past his disappointing 2019 in Detroit. In 33 games, he hit .278 with 14 RBIs, not a bad shake at all for an infield in flux. So far in 2021 he's been even better, and even more of a fixture. Thanks, Ruben. 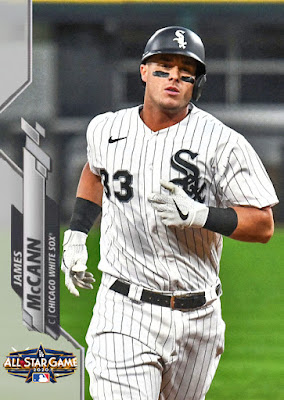 Card #211- James McCann ASG, Chicago White Sox
For the second year in a row, James McCann would have been a reserve catcher on the AL All Star team, and unlike in 2019, he'd be on the roster as a backup. McCann spent all of 2020 being the superior option to the powerful-but-one-dimensional Yasmani Grandal, while being either a bench bat or a DH. However, by ASG terms, he's a catcher, and he'd catch some innings in the ASG. 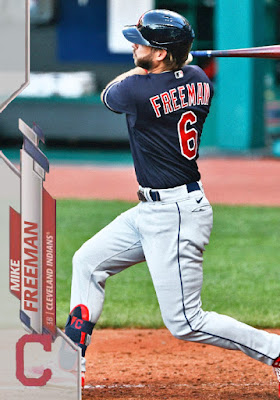 Card #212- Mike Freeman, Cleveland Indians
Another career journeyman infielder who finally found a constant place, Mike Freeman followed a decent season as a bench infielder for the Indians in 2019 with another similar season with less immediate results. In 24 2020 games, Freeman hit .237 with 5 hits and 3 RBIs. He was released after the season and is now in the Reds organization. 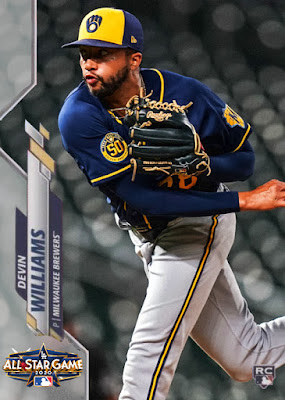 Card #213- Devin Williams ASG, Milwaukee Brewers
Another no-brainer inclusion. Devin Williams was one of the best relief pitchers in baseball in 2020, rookie or none. He was lights-out in August, and would have been worthy of an addition by Dave Martinez as a relief option. It would have been even more of a cherry on top of an extraordinary rookie season, which hopefully will lead to a strong career and not more earned-run-friendly seasons like his 2021 so far. 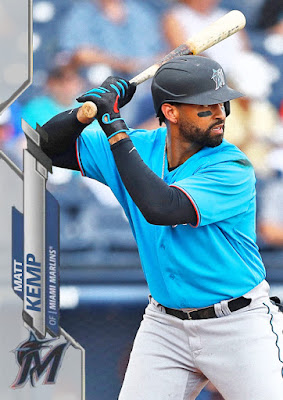 Card #214- Matt Kemp, Miami Marlins
Ah yes, one of my favorite parts of doing this series, the zero-year card. Matt Kemp played all of his 2020 games with the Colorado Rockies, but he spent Spring Training with the other 1993 expansion team, the Miami Marlins. Kemp was decent out of camp, and was still working solely as a power-hitter, but the crowded Marlins outfield last year made it impossible for Kemp to make the team. Topps did produce some Gallery, Fire and Heritage High releases of Marlin Kemp, but they were too late. 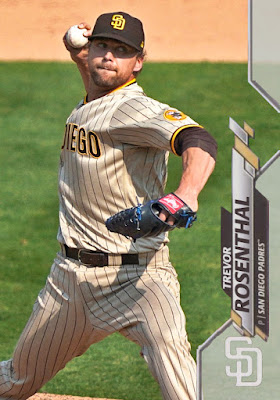 Card #215- Trevor Rosenthal, San Diego Padres
After a sensational start in Kansas City, and some thrilling comeback numbers, Trevor Rosenthal was dealt to the San Diego Padres in one of many 2020 Padres-Royals trades. Rosenthal was given the ninth in SD, and in 9 games he was unhittable, with a 0 ERA and only 3 hits allowed on top of 17 Ks. While his postseason numbers were a little rockier, he was still a formidable closer again, which led the A's to give him a ton of money...and to him subsequently getting injured. 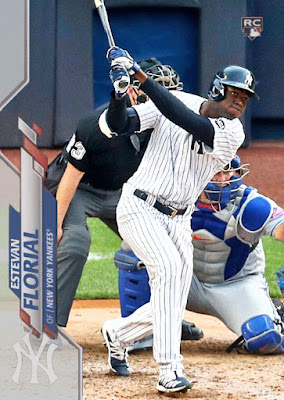 Card #216- Estevan Florial
One of the biggest Yankee prospects not named Dominguez, Estevan Florial has been a bright star in the minors in the last few years, and in a flash doubleheader with the Mets last season, the Yankees figured it'd be a cool idea to bring him up. The 22 -year-old Florial only had one game last year, but he made it count, with his first MLB hit against the Mets. I'm not entirely sure when Florial will be back in the majors again, but he teased us with a little bit of what he's capable of.

The next 9 cards go up Monday, and there are some interesting ones in there. Like Kemp, another zero-year type card, as well as some more big rookies and relievers.