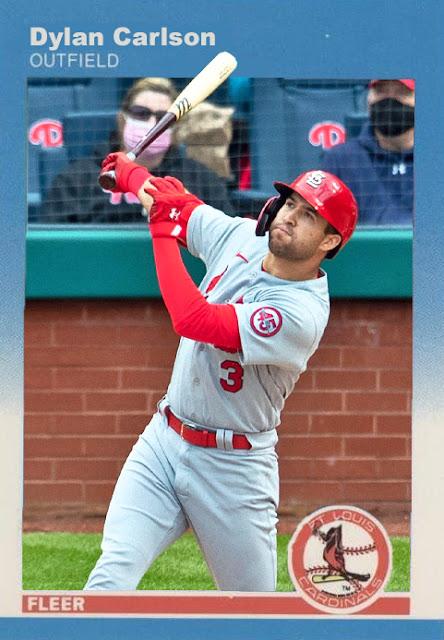 When your team heroes are 38 and 39, you're not allowed to be shocked when they hit the IL within a week of each other.

That's where the Cardinals are right now. They're doing relatively well, and rising in the standings towards the Brewers, but the loss of Yadier Molina and Adam Wainwright to injuries has put this team at more of a stalemate than it should. Yes, Andrew Knizner is doing a fine job as backup catcher, but I don't see a backup to him anywhere. And I would have suggested Daniel Ponce de Leon as a replacement for Wainwright in the rotation, but now he's injured as well, and Johan Oviedo just got brought down to the minors.

So right now, the schematic is a Flaherty-Gant-Kim-Martinez rotation with maybe one more callup, or an Oviedo return, helping out. And...I'm not 100% confident. Flaherty, Gant and Kim are fine, and doing good enough things right now, but...good enough. Flaherty has 4 wins, but none of them have more than 30 Ks. Gant and Kim have WHIP over 1.4. Carlos Martinez is also pretty shaky, and is miles from where he was around 2017. I don't know who they can bring up or wrangle into the rotation while Waino and Ponce de Leon are gone, but hopefully they have some good ideas or else we're gonna flounder for a bit.

The good news is that the lineup is in pretty good shape. Obviously Nolan Arenado is a great fit for this offense, and while Paul Goldschmidt's bat has gone a bit colder since early games, he'll hopefully take May and turn things around. And you also have Tyler O'Neill, Tommy Edman and rookie hero Dylan Carlson all hitting well. We're still waiting on people like Paul DeJong and Harrison Bader to return to career numbers, but the team is in enough of an upward place that all of that can happen in progress.

Right now, they're in a decent place in the standings, and are above a bit of a blockade of the other 3 NL Central teams. That may not last forever, and one of them, mainly Cincinnati, could come charging out chasing the competitors. The Cardinals will then need to decide how much of this lineup is ready for above-.500 work, and if they can make it this year. If they can't, it's be best if they didn't pretend like they were ready even if they aren't. They've done that enough lately.

Coming Tomorrow- First baseman for a team making a push back towards the underdogs that lapped them. Let's be clear that these are the bad guys in this situation.