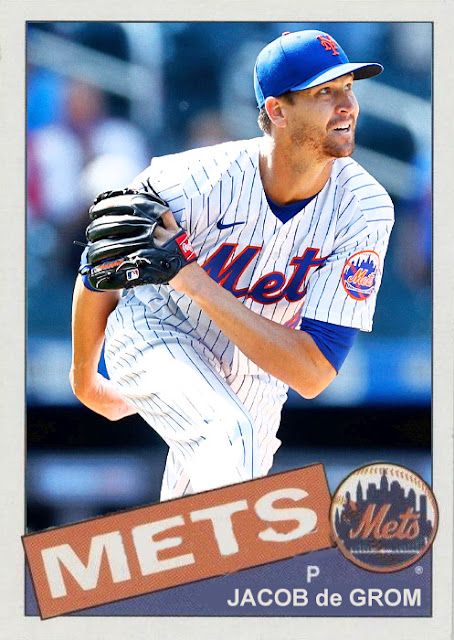 The Mets team Jacob deGrom pitched for last night was very different than the one he was pitching for when he went on the IL.

That's...a large chunk of the roster. And several of them, including McNeil, Conforto and Betances, will be out for quite a while. Now, right now the Mets are in first place in the NL East, but they are only a hair above .500, tussling with the similarly-addled Braves for the division as the Phillies flounder for a week or so. So in order to prove that they belong at the head of the division, they need to start winning games and pulling ahead, even without the injured players.

This involves a lot of replacement players making the team, plus bizarre lineup decisions like James McCann at 1st base, Cameron Maybin batting third, and Jose Peraza still being on a Major League roster at all. The good news is that this has produced some fan favorite roster additions that would otherwise be in Syracuse right now, like bench favorite Patrick Mazeika, and contact-friendly outfielder Johneshwy Fargas. And yes, if people like Fargas do end up getting major league traction because of this, I'm all for it. But Fargas may go the way of Andres Gimenez and be on another team when the lineup is completely stocked. I could be wrong, and Fargas could be the next Carlos Beltran in NY or whatever, but...with Conforto and Nimmo back eventually, I don't see him finding starting time this easily his entire career in NY.

And...then we have Jacob deGrom's return. The rotation hasn't been that bad without him, and Marcus Stroman, David Peterson and I guess Joey Lucchesi have been strong, but there was a noticeable hole without him. DeGrom wants his third Cy Young, and with the numbers he was pulling pre-injury, there's definitely a chance he could still nab one. He is in danger of being lapped by Max Scherzer, who's looking for his FOURTH, or either Corbin Burnes or Brandon Woodruff. But if he continues his pace, and keeps being the single most untouchable pitcher in baseball, he's gonna bring home even more hardware. Not just this year, but for the rest of his career.

The Mets are a bit strange this year. But Jacob deGrom being among the best in the game is the part that makes the most sense.

Coming Tonight: One of two people traded for Chris Sale who are proving their worth more than Sale is this year.