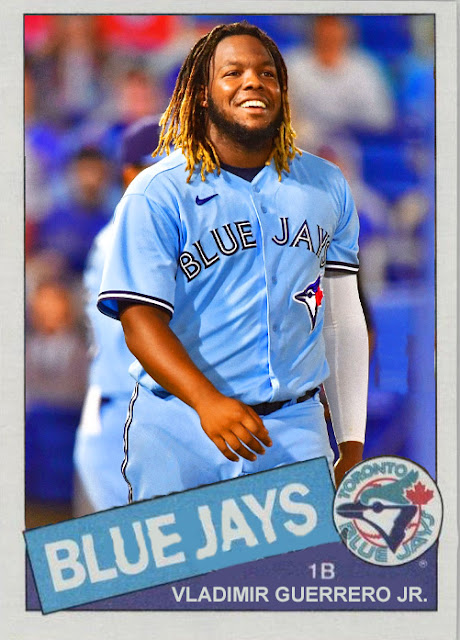 How about that Toronto youth movement. Three infielders in this lineup have 8 home runs, have over 1.2 WAR, and at least 20 RBIs. And of course, those infielders are Vladimir Guerrero Jr., Bo Bichette......and Marcus Semien, oh crap something's gone wrong

Okay, so there are clearly some issues in terms of where the Jays thought they'd be right now, and one of them is Cavan Biggio not exactly performing to the standard of Bichette and Vlad. Not that the triptych of second generation Jays stars needed to stay in line all the way, but Biggio's lack of contact hitting and production in general is making him stick out like a sore thumb, especially when Santiago Espinal exists AND can hit for average.

Additionally, there is the obvious absence of George Springer, one of the biggest offseason additions to the team, who has been injured for the majority of the season so far. In his absence, the Jays have been starting Rowdy Tellez more, but he's not hitting for average, and neither is Lourdes Gurriel in the outfield. So just one guy is spreading the lineup a bit too thin. Not that things are completely screwed, considering that we still have Randal Grichuk, Tesocar Hernandez and those infielders hitting.

And to zero in...guys, Vladimir Guerrero Jr. is like, really good at baseball. I knew something would be happening this year due to his impressing Spring Training numbers, but...Vlad has taken off, with those 8 homers, 26 RBIs and a .311 average. He's doing both power and contact, he's fitting right in as the centerpiece of the team, and he's one of the best-hitting players for a Florida team right now. All amazing stuff.

The rest of this Jays team is still mostly good, and there's some great stuff coming from Hyun-Jin Ryu and Robbie Ray that hasn't exactly spread to the rest of the rotation, glossing over the fact that the rotation is really the one place that the youth movement strategy has had really no effect on. It's also alarming that now THREE closing pitchers have hit the IL [first Kirby Yates, then Julian Merriweather, then Rafael Dolis], leaving the Jays struggling to close in on a fourth choice for one. Jordan Romano? Tim Mayza?

Despite the haziness, I still think these Blue Jays are gonna be chasing a goalpost this year, and may have enough to launch themselves back into the conversation, which is something I'm not exactly confident in for the Rays. They could still be a fun underdog team, but I'm worried that, like the mid-2010s Jays team, they could turn on me very quickly.

Coming Tomorrow- The MVP talks, captain! They're coming in too fast!