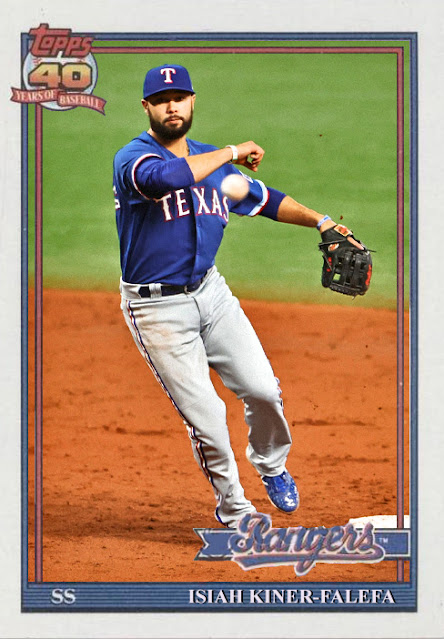 Alright, I guess we can add the Texas Rangers to the list of fun last place teams. Because quite a bit is working for these guys right now, and not just tested successes like Isiah Kiner-Falefa and Nick Solak.

The main takeaway from this team is that the strategy of taking little contracts and minor guys that people were willing to get rid of has paid off. It's the equivalent of filmmakers pooling film from the ends of negatives in order to get enough film to make a movie. The Rangers had to really scrape the bottom of the barrel to find people like Adolis Garcia, Jonah Heim and Josh Sborz, but they're all doing well when no one expected them to. Garcia has 7 homers and 19 RBIs, some huge numbers for a guy let loose by St. Louis.

Then you get to the roster pieces of other teams that didn't fit there. Mike Foltynewicz got chased out of Atlanta, now he's got 31 Ks for the Rangers and is looking pretty decent. Dane Dunning was snatched in the Lance Lynn trade, he's unsurprisingly doing well so far. Nate Lowe was a late trade from Tampa, he's having an awesome season in a full starting role, leading the team in RBIs. Charlie Culberson is the Tommy La Stella- he's been a bench player extraordinaire for years, now he's got a starting role and he's making the absolute most of it. And Ian Kennedy is rebounding from a disappointing sophomore year as a closer by getting right back into motion, with 8 saves already.

And then you have the formative guys who stuck around. The one drawback is that without Odor, Andrus and Choo, there's not much of a core, and Joey Gallo is having a sort of ho-hum season thus far. So they're rallying around people like Kiner-Falefa, who's off to an excellent start with 31 hits already, and Kyle Gibson, who's 3-0 as the apparent ace of the team.

So what's good is good, and it's there to distract from the fact that there's still a lot of holes and a lot of room for people to grow into things. I feel like they're three or four pieces away from having a good enough core to make a run at things. Somebody else is gonna fall into their lap soon enough, and then they'll be chasing the A's and Astros in no time.

Coming Tomorrow- The great thing about playing in Denver is that anytime you want, you can just decide to become a home run hitter.