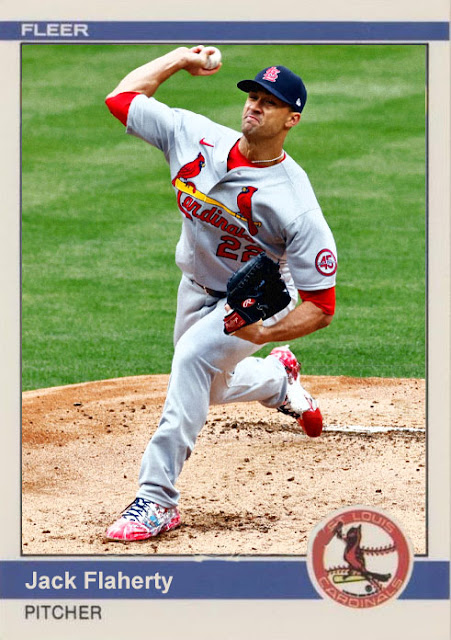 Okay. The Cardinals are in first...and have retained first...which means they're probably gonna be in first for most of the season. Now, as the resident Cardinals-hater here [again, blame the 2011 playoffs], I have to figure out how I feel about this.

And I'm not gonna act like they don't deserve it. The Brewers and Cubs have had cold stretches recently, and the Cubs, while they are coming back, have a few more problem areas than the Cardinals right now [though that bullpen...damn, anyway]. The Cardinals have a working rotation, an excellent closer, and enough of their roster currently hitting and healthy that I'm not terribly worried about them.

The rotation is interesting, because as good of a season Jack Flaherty is having, what with an 8-1 record and a 2.84 ERA, there's arguably more interesting stories elsewhere in the rotation. John Gant and Kwang-Hyun Kim have fully crossed over to the rotation and are both impressing with sharp numbers. Carlos Martinez has leveled his ERA to around a 4, which, given the start of his season, felt very unlikely. Even Adam Wainwright has decent enough numbers so far. And Alex Reyes has warmed right into a role in the ninth rather than being pissy about being passed over for the rotation yet again. So, from that component, plus a strong bullpen in general, this team is in business. The Cardinals-Brewers matchups this season are gonna be fierce as hell because it's gonna be waiting for either one's pitching staff to make a human error, and that might be a while for either.

The lineup, however, is working without Tyler O'Neill, Harrison Bader and Paul DeJong right now. At the very least they have Edmundo Sosa hitting, and enough decent defensive call-ups recently, but unless most of them start hitting, the Cards are gonna have to keep starting Matt Carpenter, and given how cooked he's seemed lately, that's not a good sign. Having Edman, Carlson, Arenado, Goldschmidt and Molina all on is a good thing, and is powering this team through a tough division, but with enough open spots thanks to injury, that momentum is in danger of stopping up, especially with the Cubs approaching.

I know I'm usually used to hating this team, but they're actually doing a lot right this year, and there's a chance they could actually zip through a year without pissing me off. However, the year is still young.

Coming Tomorrow- A first place team that's fun, likable, has great stars, and really needs to stay in first or else we're gonna be fresh out of good things this year.