Onto another 9 cards of the 2020 Final Edition set. We're very close to having less than 100 cards left to cover in this set, and I'm already setting up more Topps Cards That Should Have Been cards for after we're done here. Still, we have 2020 to keep wrapping up, so onward we go... 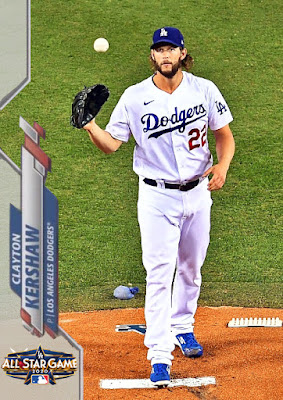 2020 marked the beginning of the Kershawnaissiance. After a few seasons of injuries, slightly more elevated ERAs [like 3], and stepping back to let Hyun-Jin Ryu and Walker Buehler excel, Clayton Kershaw finally struck back and had another classic, incredible year. So while I don't think he would have started the ASG for the NL, had the 2020 ASG happened, I think it'd be necessary for the home crowd at Dodger Stadium for Kersh to show up in some capacity. Whatever, it'll happen again soon. 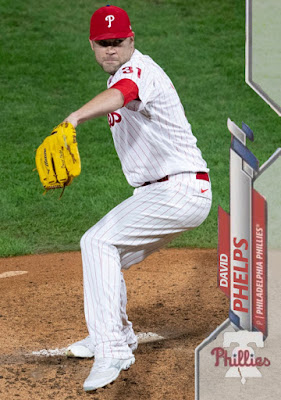 Card #218- David Phelps, Philadelphia Phillies
Phelps was yet another attempt at revitalizing the sorry, pitiful Phillies bullpen last year, and after his impressive Brewers start, he was a fine idea, especially considering his prior connection to Phils skipper Joe Girardi. But...the ineptitude of the Philly bullpen sucked David Phelps in as well, with 12.91 ERA in 10 games. TWELVE...NINETY-ONE. And eleven earned runs a game, meaning 1 earned run per game, which no reliever wants. It was not a good stretch for Phelps. Thankfully, he's doing a lot better in Toronto right now. 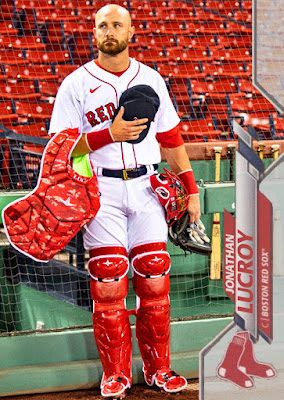 Card #219- Jonathan Lucroy, Boston Red Sox
Another zero-year type card. Jonathan Lucroy was a spring training signee, after a disappointing end to the 2019 season with Chicago, in Boston. He'd be fighting for a backup role behind Christian Vazquez, and he was a bit removed from his career peak. So while he didn't make the team, he did squeeze in a single game of MLB service last year, without a place appearance or an at-bat. He was a defensive substitution, then he suddenly wasn't needed anymore. The Washington Nationals used Lucroy similarly in 2021 before setting him aside once Yan Gomes and Alex Avila returned. 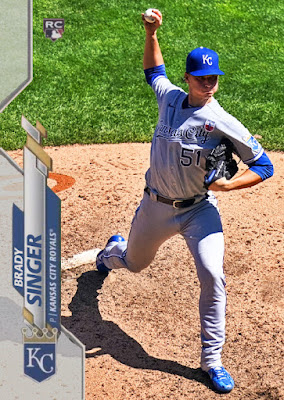 Card #220- Brady Singer, Kansas City Royals
One of the big rookies out of camp last season. Brady Singer made the Royals to begin the season, and made the rotation right off the bat. While he took a bit to really get acclimated to AL play, Singer still finished strong in 2020, with a 4.06 ERA and 61 Ks in 12 games. He's currently a trusted lower-tier member of the rotation, behind Danny Duffy and...ERVIN SANTANA? THE HELL'S HE DOING HERE? 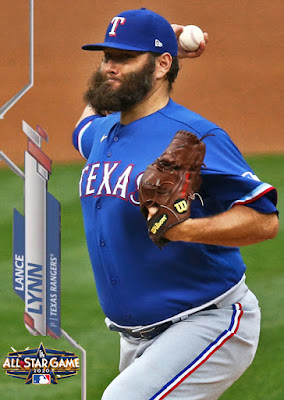 Card #221- Lance Lynn ASG, Texas Rangers
[Not sure why the siding isn't in this one. My apologies]
Lance Lynn had an even stronger 2020 in Arlington than he did a 2019. 89 Ks in 13 starts tells you everything you need to know about Lynn, as well as how dominant he can be even in a shortened season. Lynn would have been an easy pick for the ASG, as well as, most likely, the only Texas Ranger on the AL team. Lynn's taken a step down currently with the White Sox, but he's still capable of big games. 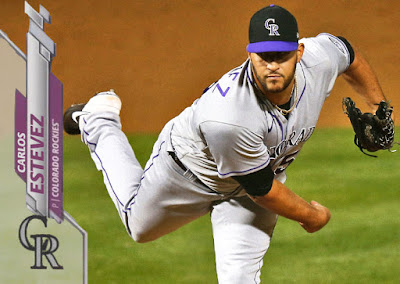 Card #222- Carlos Estevez, Colorado Rockies
I shouldn't have to explain to you all why a state known for its use of recreational drugs having a relief pitcher named Carlos Estevez is funny. Do a little research into stage names, maybe. Anyway, hotshot Carlos Estevez had another full season as relief specialist in Denver last year, and things went a little south compared to his usual numbers, with a 7.50 ERA in 26 games. He's off to a better start this year, though. 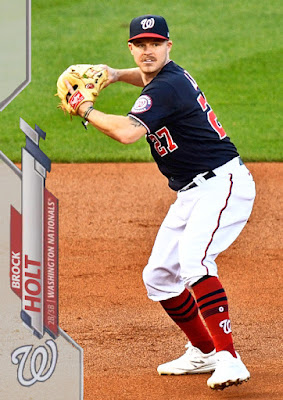 Card #223- Brock Holt, Washington Nationals
Brock Holt began the 2020 season as an infield option with the Milwaukee Brewers. Unfortunately, in 16 games with the Brewers, he could not hit for shit. So he was released, then almost immediately was picked up by the Nationals, a team still struggling to land on a competent infield picture. Holt was a pretty strong choice as a 2B/SS type, hitting .262 with 4 RBIs in 20 games. He's been pulling similar numbers in Arlington thus far, though he days of pulling higher than replacement level may be behind him. 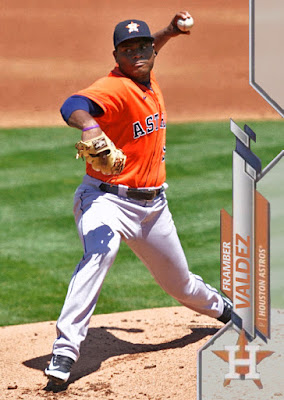 Card #224- Framber Valdez, Houston Astros
Something aligned last year when Framber Valdez, Cristian Javier and Jose Urquidy were all active in the same rotation at the same time- other than, you know, the Astros pulling into the playoffs. All three homegrown latino talents were enough to provide an x-factor for the team, which is desperately needed in the absence of Justin Verlander, and Zack Greinke's better numbers. Valdez actually pitched more innings than any other Astros starter, had a 5-3 record with 76 Ks, and had a 3-1 record and a 1.88 ERA during the postseason, with 26 Ks as well. Valdez is currently injured, but like Verlander he'll likely be back with a vengeance rather soon. 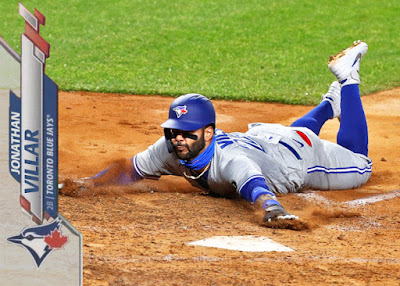 Card #225- Jonathan Villar, Toronto Blue Jays
Since leaving the Baltimore Orioles, Jonathan Villar has played for three teams that have absolutely no room for him. The first was the Marlins, who brought him on for 2020, and had him hit .259 while also surrounded by more viable defensive options. So Villar was Miami's sole trade deadline loss, as he was acquired by fellow competitor the Blue Jays...who ALSO did not have a place for Villar, with an already-set infield. So Villar's .188 average really did nothing for them, postseason notwithstanding. And now Villar plays for the Mets, who ALSO kind of had their infield pretty tight before the season, and is mostly a bench bat type. Glad the O's got the last good numbers out of this guy, I guess.