Triumph of the Grande Box: The Hits 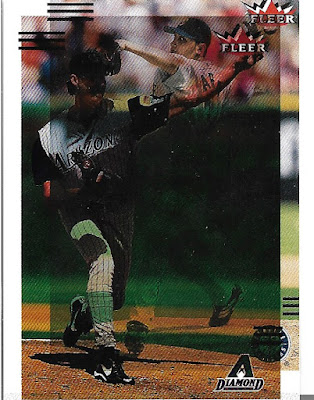 There were some spoils for me at the bottom of the package from Chris from Nachos Grande, aside from all the much-needed base cards from products I was unfamiliar with. They ranged from practical to intriguing to just plain bizarre.

This card confused both of us. It's a printing snafu, a double-printed error of both Randy Johnson's card and Freddy Garcia's card from 2002 Fleer Triple Crown. No foil on it. The back is credited to Jose Cruz Jr. of the Blue Jays. Because it's technically a Randy Johnson card, it landed in the D-Backs stack. It's a very puzzling card. It's...technically a 1/1? I don't suppose any other cards misprinted this badly exist. So I guess I'll hold onto it. 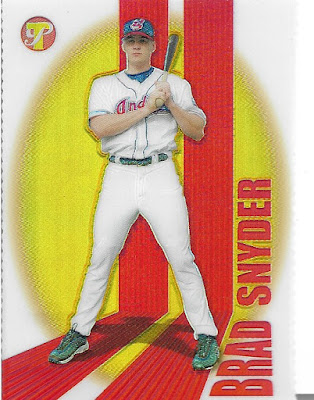 Moving onto the numbered cards in my stack, this one came to me in the Indians portion of the box. Brad Snyder was a mid-2000s Indians prospect, and was showcased here in 2004 Topps Pristine. This card is numbered to 41. I'm not sure if I really have a need for this, but with its deckle-edge and great design, it is pretty cool. 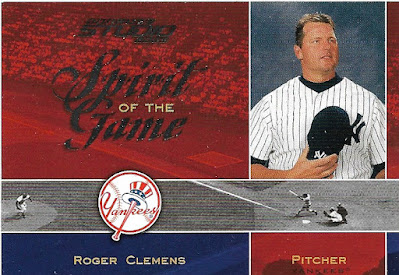 As for stuff that applies to my teams, we first have this Spirit of the Game insert, numbered to 1250, of Roger Clemens, out of 2003 Studio. As discussed, I'm not really a Clemens collector, but this isn't a bad design, or subject. 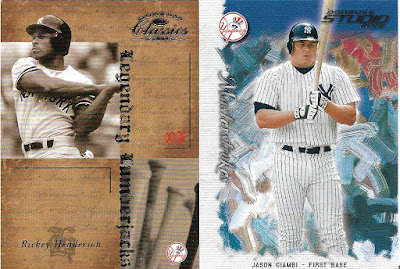 These two, from Donruss products, were both numbered to 1000. The cooler one for me is the Legendary Lumberjacks of Rickey Henderson, from 2004 Donruss Classics. How often do you find Yankee Rickey cards these days? But from a design standpoint, the Masterstrokes insert of Jason Giambi from 2003 Studio is also really cool. Giambi has been phased out of my collection, but he does look awesome on this, as does the painted background that partially resembles what could be the Yankee Stadium background behind him. 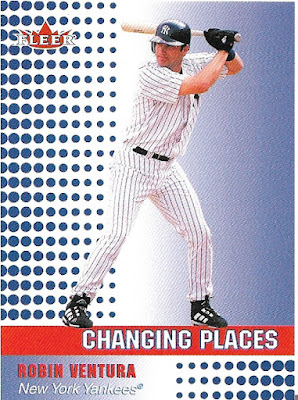 Really, the sad thing about pulling this 2002 Fleer Changing Places subset of Robin Ventura as a Yankee, which would have gone into my regular binders, was that it was a parallel numbered to 200, and would therefore go into my parallel binder. So...now I have to find the regular version for my Ventura collection, which is one of my more niche players to find cards of, but hey. 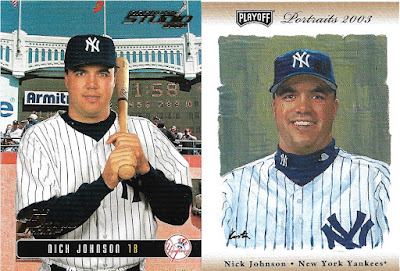 A discovery I made thanks to these breaks was that Nick Johnson was ALL OVER 2003 PRODUCTS. They thought he'd be the big rookie piece that'd help the Yankees for the future eras, but of course he'd be traded for Javier Vazquez and become a charter member of the Nationals. Both of these cards are numbered to 100. 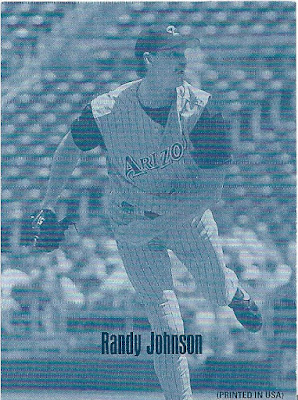 This one is...very odd. This came from 2004 Leaf Second Edition, and it's a blue Exhibit insert of Randy Johnson, which is already really cool. All of these cards have multiple versions, owing to codes and subtitles on the cards. So this one is numbered to 66 copies. Which is very cool. But I had to go on baseballcardpedia to find that out. Chris had guessed it was numbered to 50, and as it's not serial numbered, I had to do the research to verify it. Decisions like these probably attributed to Leaf, and Donruss's, exit from the card business the following year. 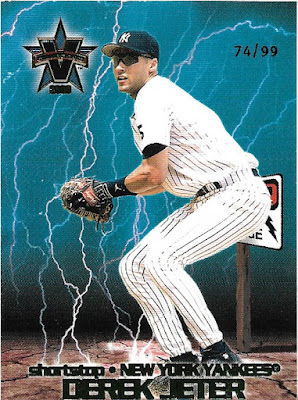 Of the numbered cards, this was the coolest one. It's a green foil parallel of one of those awesome High Voltage inserts from 2000 Pacific Vanguard, of Derek Jeter, numbered to 99 copies. Insanely cool, and a great player choice.
Now onto some actual hits... 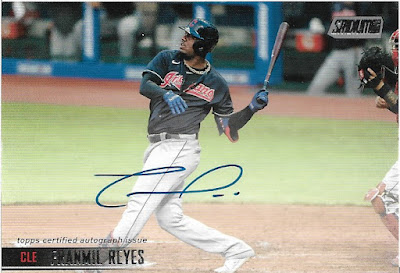 This was the sole non-Yankee hit I got, and it's still a pretty nice one. This is a 2021 Stadium Club autograph of Franmil Reyes, chief masher for Cleveland. As far as SC auto subjects go, it's a pretty good one. Not completely indebted to it, but it's still a cool on-card auto. 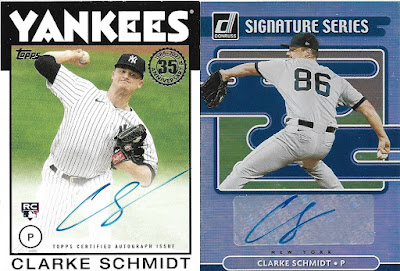 As for Yankee autos, Chris's 2021 box breaks yielded not one but TWO autographed cards from future Yankee starter [I HOPE] Clarke Schmidt. Schmidt is a decent pitching prospect, he's had some decent starts this year in multiple factions of the minors, and he is a rare Yankee pitcher with my last name. We already have a Yankee starter with my FIRST name, so let's get Clarke up here so we can complete the duo. I prefer the 86T one from 2021 Topps to the sticker auto from Donruss, but both of these are welcome. Hopefully he pans out. Then again, I still have a Luis Severino auto from a Nachos group break from a few years ago, back when I was worried HE wouldn't pan out, and while we're still waiting for his return from the IL, he still gave us some gems. 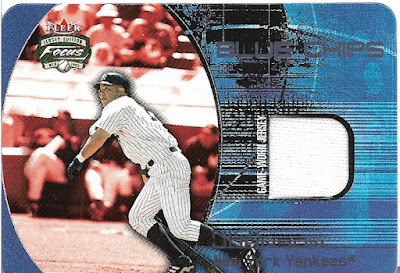 As for the relics, we'll start with this one from 2003 Fleer Focus Jersey Edition. Design wise, we are SO in business here, with this Blue Chips design, the rounded edges, and the cool feel of the card. Granted, this is another Nick Johnson, and he's not very high on my list of Yankees, but this is still a very cool card. 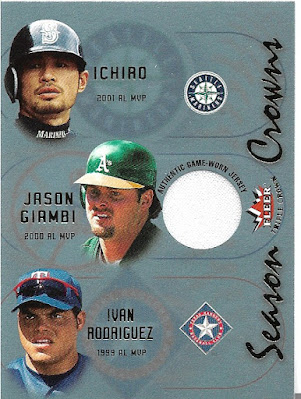 Then we have this...very strange one from 2002 Fleer Triple Crown. Three players are showcased, the last three MVPs. Only one of them gets a relic, and it's Jason Giambi, and it says on the back that this came from an Oakland Athletics game worn jersey. But since this is a 2002 product, and Giambi's trade was finalized in the offseason, this is a Yankee card. He is pictured as an Athletic, the Jersey is from an A's game...but this is a Yankee card, and it goes in my pile. While it would have been cooler to get a Yankee relic of one of the other two people pictured, this still works as a puzzling but worthy Yankee[/A's] game used card.
There was one that kind of impressed me, though: 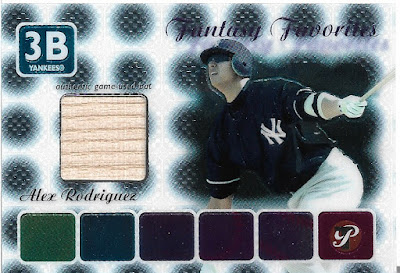 What really got me to appreciate this one was imagining it came out of a pack in 2004.
Not only is it a well-designed card, not only is it a bat card, and not only is it one of the better relics to come out of 2004 Pristine...but it's Alex Rodriguez in his first year as a Yankee. I would have been freaking out if I had pulled this a year or so after its release. For a while, A-Rod was really worth all the hype, and was a Yankee legend. I wish steroids and his general jerk demeanor didn't detract from some great seasons, but this still is a great pull that I will appreciate, even if I'm not really the biggest A-Rod fan anymore.
That puts a capper on the massive Nachos Grande box here. Tons of great stuff from several breaks here. Looking forward to what I might get to take home in the next Breaker's Club.
Posted by Jordan at 2:07 PM
Labels: group break, Nachos Grande