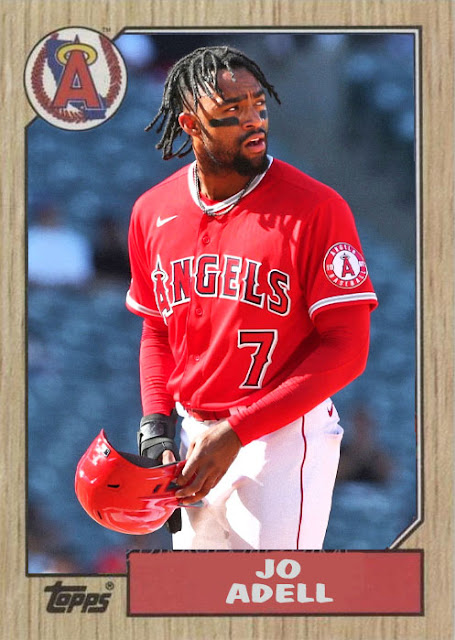 Tonight, the Angels have made several statements in their lineup for the game against Oakland.

First of all, they're starting a rookie pitcher, Jhonathan Diaz, who will make his debut tonight. Rookie starter. Okay. Brandon Marsh, another rookie, is the leadoff hitter, in the position fellow rookie Jo Adell used to be essentially. And even if Jared Walsh is the best power hitter on the team, the cleanup bat tonight is Phil Gosselin, former DH for the Phillies. And the rest of their lineup is littered with people like Jack Mayfield, Juan Lagares and Luis Rengifo.

The Angels. We actually thought they were going to compete this year.

Look...I've talked about how unlucky this team is, but they were especially unlucky in 2021. Not only did they lose Mike Trout to an injury, but they lost Anthony Rendon, Alex Cobb, Patrick Sandoval, Griffin Canning, Dexter Fowler AND NOW JO ADELL to injuries. And almost all of them, especially the big ones like Rendon, Trout and Adell, have been met with a 'oh they'll be back in 2021' from Joe Maddon, and NONE OF THEM EVER ARE. I thought Nick Anderson was out for the season, he's back now. I thought Chris Sale would miss all of this year, he's back and thriving. I'd thought Tatis would be out for the season three separate times this year, he's still in it, though...granted maybe he should have sat.

The sad part is that Adell was beginning to branch out, with 32 hits and 26 RBIs in 25 games, not bad at all for someone who felt so awkward in the majors last year. But the fact that Adell, a replacement, can't even stay healthy...that's just cruel at this point. Now the Angels are pretty much running on replacement energy, forcing to start Packy Naughton and people like that. The good news is that one recent callup, Janson Junk, has been pretty decent in two starts so far, with a 2.25 ERA, despite a lack of true earth-shaking stats. And maybe this Diaz guy will be decent. But this is not the team the Angels thought they'd be running with this season, and even with the MVP, it's not a great year for Angels fans.

Maybe it'll be 2022 where everything comes together. You have to think it eventually will, right?

Coming Tomorrow- A former Pirates prospect who finally found a home in Denver.