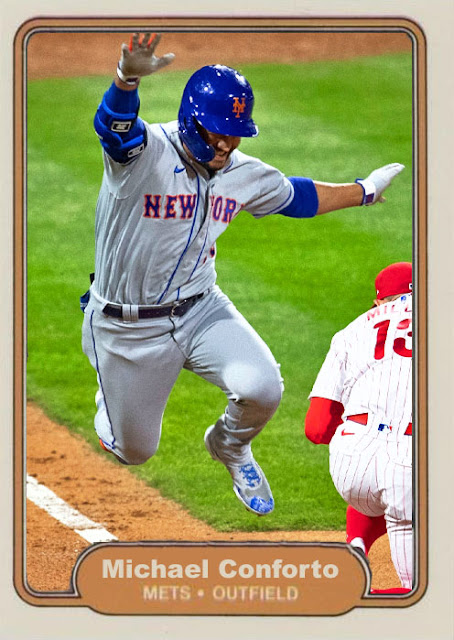 Lol, I'm currently in Queens, and here's a Mets custom.

I'm not...like...here for the Mets-Yankees series, that'd be really odd. Could you imagine trying to get tickets to that? Especially the 9/11 game. Jeez. But no, I was in Queens for a Wedding, and now here I am...posting about the Mets, the eternal spoiler of baseball.

I feel like now I know a little bit more about them than I have all season, just because a lot of the players that hadn't been fleshed out all season, or since their acquisition, are now doing well. Lindor clearly isn't peak-Lindor right now, but he's been solid, with 47 RBIs and some great defensive work. Javier Baez is also coming into his own in Queens, hitting .291 with 15 RBIs and 7 homers in 29 games, having some very big recent power moments as well. And plus, this has still been a great season for people like Marcus Stroman, Pete Alonso, Brandon Nimmo and Jonathan Villar.

The real issue was that injuries severely wounded this team. A lot like the Indians, a major pitching player getting injured partway through took a huge chunk out of this team's playoff hopes. The Mets rotation without deGrom isn't BAD...but you also have people like Taijuan Walker, Tylor Megill and Carlos Carrasco, who aren't always going to be perfect. At the very least Rich Hill and Trevor Williams have been pretty good so far for the Mets, with Hill again continuing his reign as the new Bartolo Colon. But without deGrom, this isn't the end-all beat-all in the NL East. That would be the Braves.

And right now, even as a spoiler, the Mets are just...sort of idling by. Yes, they can be a match for the sinking Yankees, but they're losing series' to the Nationals and Marlins. In September. Regardless of a hot streak leading off the month, they're still not all the way there, same as the Phillies. And while they're gonna continue to be the grim reaper of the leagues and start coming for competitors who aren't ready like usual, there's no happy ending for them here, and there might not be one until everyone's on the same page, and healthy.

Maybe someday Jacob deGrom will make the playoffs again. But hopefully it will be with the Mets, and it won't be too far away.

Coming Tonight: The Tigers' only ASG nod from this year.