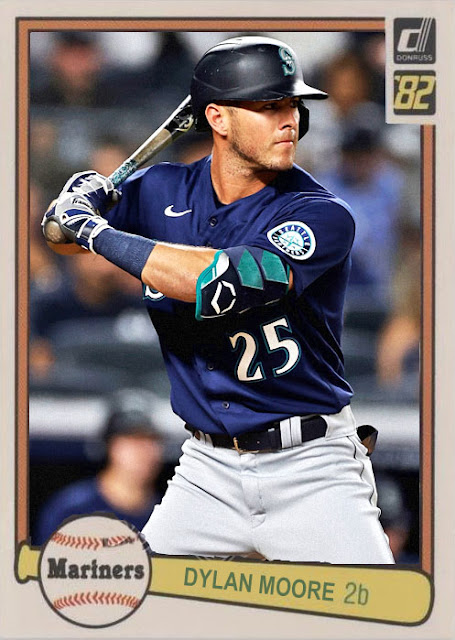 There's an old Shel Silverstein cartoon I think about from time to time. Two guys shackled up in prison, in a room all by themselves. One says to the other "now, here's my plan." Absolutely no chance of escape, and he's still got an idea.

Shel Silverstein must have been a Mariners fan.

Every year, the Mariners are deadlocked out of a chance, thanks to teams like the Astros, A's and Angels, and every year they outdo people's expectations, flounder around third, and try and sneak into the conversation. For someone like the Cardinals, who compete every year, it's reprehensible, but for the Mariners, who don't usually compete, it's interesting, and fun. I tend to root for the outcomes that would piss off Rob Manfred, and this is definitely one of them.

And even when the outcome looks bleak, and when it looks like there's absolutely no place for the Mariners in the playoff conversation...you still see Mariners fans going 'right, here's how we make it in'. Just the other day they were going 'so if the Yankees lose all three of these games to the Red Sox and if this other thing also happens, the Mariners are playoff bound'. Forgetting, of course, that in a wild card scenario against Boston, the Yankees, or even Toronto, they would not be the favorite.

But...as of last night, the Seattle Mariners have lapped the Toronto Blue Jays in the standings. Even a week ago, d'you think anyone could have predicted that? Plus, they've lapped the Oakland Athletics in the division standings. They have 85 wins, more than people like the Phillies, Reds and Padres, and as I write this, they have won six straight games.

They are also looking at a final week that consists of five games against the Angels and three games against the A's, both division rivals that are lower in the standings than they. Meanwhile, the Yankees have to play Toronto and Tampa after this Boston series. I'd also like to point out that the Blue Jays and Red Sox both have to play the Orioles this week, which is awfully interesting. Once again, I blame Manfred.

And even if the Yanks are looking mighty against the Sox right now...could the hottest team in the wild card race actually be the Mariners???

Like, this team has made up so much ground in the last 2 months. Yes, they lost Kendall Graveman, but they gained Tyler Anderson, Abraham Toro, Diego Castillo and Joe Smith, who have all been brilliant with the team. Kyle Seager has an 100 RBI year on his hands. TY FRANCE, not J.P. Crawford, has the best average on the team, and is hitting beautifully right now. Dylan Moore and Tom Murphy have become excellent clutch hitters. Hell, even Jarred Kelenic is learning to hit for power, which should set up a much better 2022.

And the fact that they have done this all without Kyle Lewis, Justin Dunn, Evan White and Shed Long is pretty great. This isn't even the entirety of the team that people thought could do things in 2021.

I'd kind of love it if the Mariners made the playoffs, even if it'd ruin season-long stories like the Red Sox and Blue Jays [or even the Yanks]. Hell, I honestly think the Mariners beating the Yankees, or whichever AL East team makes it, in a wild card playoff, would be the funniest thing ever, and it'd be so good for baseball.

And if they do lose, and miss out again...I'm sure they've got a plan to get out of it.

Coming Tomorrow- A 1-game wild card playoff...with this guy on the mound. This has happened before.