MadBum Across the Water 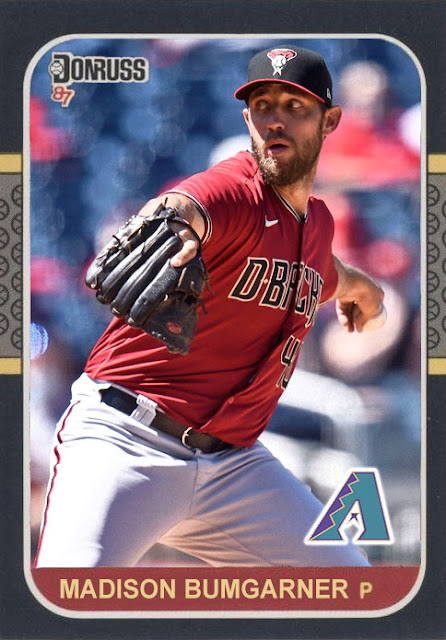 I think it's probably sunk in for the Diamondbacks that the Madison Bumgarner they paid for isn't the one that was dominant for the Giants for a little under a decade. But still, the one they got isn't bad.

MadBum is making the most out of a bad situation. He got signed by a low-level team hoping to compete with him, they didn't, and now he's stuck in last as the former last place team he sailed away from is circling first. It's the kind of thing his fellow 2020 signee Starling Marte was finally able to get out of this year in a trade to Oakland. But Bumgarner is still...stuck in Phoenix. Doing his best.

I'll at least say that Bumgarner's been healthier and more consistent than he was in 2020. In 22 starts he has a 4.50 ERA, which isn't great but is way better than it was last year, has 106 Ks and pitched a 7-inning no-hitter earlier in the year. He's past his peak, though. The D-Backs got very lucky before, signing two great pitchers to long-term deals past what would be logically considered their prime. Those two pitchers, of course, were Randy Johnson and Zack Greinke. Madison Bumgarner, while great at his height, is making it clear that he's just...a good pitcher now. Not elite like the other two. He had some great seasons, had some injuries, and isn't where he used to be.

That's also kind of where the Diamondbacks are. They were competitive for a short period, lost all their great players, now only really have Ketel Marte, Carson Kelly and Zac Gallen and are just sort of idling by. They're no longer the worst team in the league [apparently that's now the Orioles, Yankee upsets aside], but they're definitely not promising right now. Right now they just have a lot of rookies and second years trying their damnedest and just not doing much, Varsho notwithstanding.

I don't know if a revamp is coming, if any substantial changes are gonna happen in the offseason, if there's any immediate steps that can be taken to improve things. I just know that this team recently celebrated the 20th anniversary of their first ring. Which is crazy. The 2001 season was 20 years ago. It used to just be 'oh, they won their first World Series relatively recently', and now it's been two decades. Time is ticking for this team. And it's only gonna keep doing that.

Coming Tonight: Formerly the last of the old guard remaining, now the pin holding the entire competitive team together.