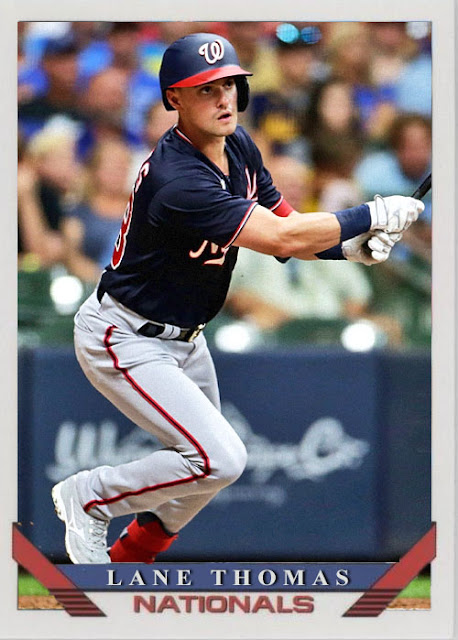 The Cardinals are the Mike Richards of baseball. If they had done nothing, ABSOLUTELY NOTHING AT ALL, they would be in a better place than they are right now.

Like...why trade Lane Thomas for Jon Lester? What is the logical point of trading someone that could still be a decent outfield piece for you in exchange for a guy who's not even gonna give you a 4 ERA for 10 starts? Yes, now the Gant-for-Happ trade looks good, in a way that...makes me think the Cards knew something we all didn't know. But...Thomas for Lester is just...earth-shatteringly bad.

Cause Lane Thomas, in 14 games for the Nats, is hitting .304, with 14 hits and 6 RBIs. Now that he is on a team with lots of room, and that can play him pretty much every day, and so now he's taking off. He showed a little bit of this promise in St. Louis, but he was always a replacement pretty much. There was always an arrangement there with Harrison Bader, Tyler O'Neill and somebody else, and Thomas was never the third name. But now...maybe he's a piece the new team can build around.

You're seeing a lot of blocked pieces begin to come into place for the Nats. Riley Adams was the fourth stringer in Toronto, now he's outdoing Tres Barrera for the starting gig and hitting .341 with 2 homers and 7 RBIs. Keibert Ruiz was blocked behind Will Smith and Austin Barnes in LA, and now he's slowly inching his way up in the majors, and is already making contact. Josiah Gray was a replacement arm for the Dodgers, and through 6 starts he's got a 4 ERA and 33 Ks. No wins yet, but an improvement. And finally, Carter Kieboom, Adrian Sanchez, Yadiel Hernandez, Andrew Stevenson and Luis Garcia actually have room to start rather than just sort of bobbing around the bench.

This Nats team still isn't, like, GOOD, but there's a lot of intriguing things going on with these new members. 2022 will be an interesting year, because now they'll be able to start with this formation, make decisions from there, and shape what the transitional period of Nats baseball will look like. And just for the fans' sake, I hope Josh Bell has some good seasons coming up, cause he's about all they've got left right now.