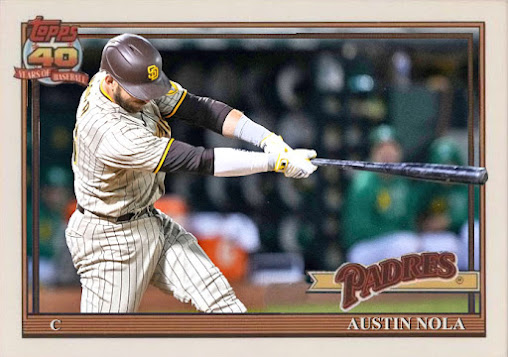 Man, how refreshing is it that I finally keep these month in review posts going the whole season? Usually I forget around June.

Anyway, now we've got to wrap up August, which was an interesting, if slightly anticlimactic, month to cover. First off, as usual, let's revisit the 5 Predictions I made for August 2021:

1. The hierarchy changes in the NL West, finally. Not...quite. The Padres are edging out of the race for the division, and the Dodgers are within range of lapping the Giants, but...we're not there yet.
2. One of the lower-rung competitors in the AL East catches up and reclaims the conversation. Well, the Yankees definitely did this in August, getting red-hot with a major streak, climbing the rankings and lapping the Red Sox. They're running the risk of slipping right now, but I'm confident they'll hang on.
3. 2022's Rookie of the Year is called up [won't be able to really verify this til 2022, but I'll try next month] Well, we did see call-ups for Rangers rookies Glenn Otto and A.J. Alexy, Miami pitching prospect Edward Cabrera, and also prospects like Jake McCarthy, Kevin Smith and Keibert Ruiz. You never know.
4. One inexplicable waiver deal that pisses me off. What do the Reds need Asdrubal Cabrera for? Why didn't you need him a month ago?
5. A previously-injured player returns and gives his team the momentum they need for the playoffs. Luis Robert, man. Hell, him, Jimenez and Grandal are all hot right now, giving the White Sox a serious boost. Which is nice, cause they're gonna need a very high seed to get by this postseason, it seems. You could also say this about Chris Sale and the Red Sox.

So, honestly, I did pretty well this month. And let's see why, thanks to 5 Things From August 2021 That No One Could Predict:

1. The immense rise of the New York Yankees. Yeah, people probably thought they'd make a run, but not like this, and not without Anthony Rizzo and, for a lot of the month, Gerrit Cole. The Yanks won 13 straight in August, sweeping some great teams, and using people like Andrew Velasquez, Luis Gil and Luke Voit for huge moments. Happy to see it.

2. The Reds lap the Padres in the Wild Card standings. Everyone, from the beginning of the year, has been expecting the Padres to be a major player, and the Giants' rise meant that at least one NL West competitor would have to sit out, especially considering the crowded wild card climate. But thanks to a very hot start to the month, the Reds took off, lapping San Diego, taking advantage of their slow run, and affixing themselves momentarily to the second wild card spot. This isn't set in stone, and could change again before the end of September, but...if they do make the wild card game, that'd be pretty damn cool.

3. The Orioles' 18-game streak. Like the Yankees, we knew they were bad...but not THIS BAD. Eighteen damn games of losses, home and away, with Means and Mullins and with Harvey and Stewart. Trey Mancini's once-hot output has slowed to a crawl, and the pitching continues to seriously disappoint. I'm glad they're back to winning some games, but this was a very nasty stretch that'll hopefully act as a turning point as the team gets better.

4. Salvador Perez officially becomes a power hitter. The homers had been flying all year, but this month, the career contact hitter cemented once and for all that his strength is now in the long ball. Which is great, he's gotten some MVP support, it's a great season for his rolodex when he retires. But more importantly, he's squarely in the home run race, with 38 homers, tied for second in the league with Vladimir Guerrero Jr. I never would have suspected Perez would be a 40-home-run guy, but it's looking like he will be. Very good for the Royals, who've run out of great stories after April.

And, as for the antithesis, 5 Things About August 2021 That I Probably Could Have Predicted:

1. The Braves take the NL East. Of course they would. No teams in this division have been good, and the Braves were just waiting for that little push to become good again. Even without Marcell Ozuna and Ronald Acuna, the Braves struck back, using Joc Pederson, Adam Duvall, a now-surging Freddie Freeman, and come ups from Dansby Swanson and Austin Riley. The Phils aren't out of it yet, but I am thinking the Braves could hang onto the division and have a nice playoff run.

2. Wander Franco catches fire with an on-base streak. Sure he would. We'd all been waiting for him to adjust to MLB pitching, the .190 May was just a fluke, so now he's hot as hell. Let's just give him the damned Rookie of the Year award and get this over with.

3. The Cubs sink rapidly without 2/3rd of the core. Frank Schwindel, Rafael Ortega, Andrew Romine, Adrian Sampson...wait, where are you going? For a crew without a lot of trusted starters remaining, 6 August wins sounds about right.

4. The standout Cy Young candidate being a Dodger. Yes. Perhaps not the one we thought it would be in April [thanks again, Trevor], but Walker Buehler has surpassed Zack Wheeler to become the favorite in the NL. It could still be Wheeler, but it remains to be seen if his September will be more like his April to July, or just more like his August.

5. The Astros remain in first despite all obstacles. Yeah. If Manfred won't stop this team, nobody will.

Alright, now let's hit the 5 Most Important Players of August 2021

And finally, let's see if I can nail 5 Predictions for September 2021:

1. Right now the playoffs are looking like this- Rays-White Sox-Astros-Yanks/Red Sox, and Braves-Brewers-Giants-Dodgers/Reds. I predict that they're not gonna look like this in a month. Someone is gonna sneak in.

2. One more absolutely huge rookie call-up for the road. I'm not thinking Rutschman, but somebody big. It's September, let's go crazy.

3. The Mets will once again succeed in sweeping someone out of playoff contention, other than themselves.

4. Both the AL East race and the NL West race will have a surprising outcome.

5. One very important figure for a competitive team will miss the playoffs with an injury.

Alright, that's all for August. Let's have a good, clean, fun September.

Coming Tonight: A Blue Jays rookie pitcher struggling to keep his team in the fight.