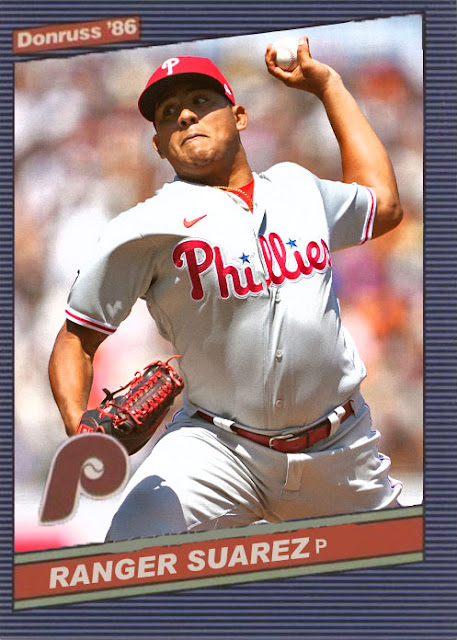 Yes, there's still a 3-game margin between us and the Braves, but the clock is ticking, and the Braves are playing like a playoff team, while the Phillies are having TIGHT matchups with the Orioles and Pirates. You had this in the schedule so you could coast, not get strung out by the Orioles. Even if there is still time to make mistakes, the mistakes are very costly for the Phillies, and if they're playing for a divisional spot, they're not a great sign of how a division series against the red-hot Brewers will go.

But...whether the Phils lose here or early next month, this season is one that hasn't really deserved the insane breakout that has been Ranger Suarez.

This is a guy who wandered onto the scene as a prospect a few years ago, never really found a proper place with the Phils. And then earlier this year he was brought up as a reliever and went scoreless to under-1 ERA, becoming one of the top earners of the season for the Phils. Then there was the point in July where Suarez was both used as a closer AND a starter, eventually being placed into the rotation as Kennedy came aboard. And once he became a starter, he truly blossomed, with a 1.99 ERA and 49 Ks in 10 starts. The only thing is he has 6 wins, and 5 of them are as a reliever. So the versatility has spread him a bit thin as a wins guy.

But, Ranger Suarez has come the furthest of everyone on this team, and has been a solid, reliable member of the rotation in a season where Aaron Nola and Kyle Gibson have had the occasional rotten start. The three top performers on the 2021 Phillies are Zack Wheeler, a Cy Young candidate, Bryce Harper, an MVP candidate...and little old Ranger Suarez. Which is kinda nice.

There have been a lot of fun unsung heroes on this team. Ronald Torreyes, Brad Miller, Cam Bedrosian, guys like that. So while this has been a fun team, I'm not sure if they're a playoff team. But this season has still set them up for future dominance, which is more than I can say for the last few years.

Coming Tonight: As the rest of the Indians rotation becomes healthy again, a young, dangerous fireballer hopes he can get one or two more insane starts in.