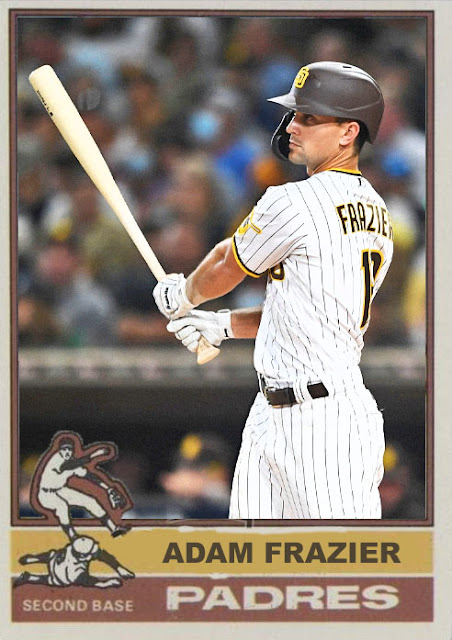 Let's not be coy, 2021 has been a career year for Adam Frazier. The guy started at 2nd in the All Star Game, led the league in hits and average for periods of time, has topped his career marks in hits, doubles, stolen bases and average, and will have a combined 4+ WAR by the end of the year. For a guy who started the season playing for the last-place Pirates, alongside Will Craig, Todd Frazier and Anthony Alford, that's really good.

What's really unfortunate, though, is how Adam Frazier is ending his 2021 season.

Not that his numbers are bad. He's hitting .273 with 47 hits in 51 games in San Diego, which isn't bad at all, and has been a contact success for a haven for contact hitters. But compared to his Pirates numbers, where he hit .324 with 125 hits in 98 games, they're kind of tame. And I'm not sure if it's more indicative of where Frazier has been in the last few months, or where the Padres have been. Because, like Frazier, the Padres have skidded to a halt after a strong first half.

It's a lot of different factors. It's the Tatis thing, with his injuries, positional changes and tension sort of putting a haze over the team. It's also the pitching, as Snell, Lamet and Darvish have had shaky starts here and there. And it's also the fact that, as the Giants and Dodgers are both better NL West teams, the road to the postseason was never going to be an easy one for this Padres team, and it involved hanging to that last wild card spot for deal life. Unfortunately for them, the Reds, Phillies, and eventually Cardinals also wanted that spot, and as the Cardinals took off, the Padres stayed at the same speed, and lost focus.

It's very sad, especially considering this team's epic start, and their insane moments in the first few months, mostly courtesy of Tatis, Machado, Cronenworth and Musgrove. And this team has enough depth where I'm not worried about their ability to compete for the next few years. But the fact that they ran out of steam this quickly, and couldn't even make it to the Dodgers rematch, is telling. And it's indicative of the fact that the Padres will have to make a lot more fixes before next season. Yes, getting Mike Clevinger back will help, but they also need to tighten the outfield, fix Tatis, get a few relievers that won't crap out, and work on beating those top two teams.

Because if the entirety of this Padres team's prime is wasted on seasons where they're trapped under the Giants or Dodgers, then absolutely nothing is going to get done.

Coming Tonight: A relief asset for a team that's still trying to squeeze into a playoff spot that might not be theirs.