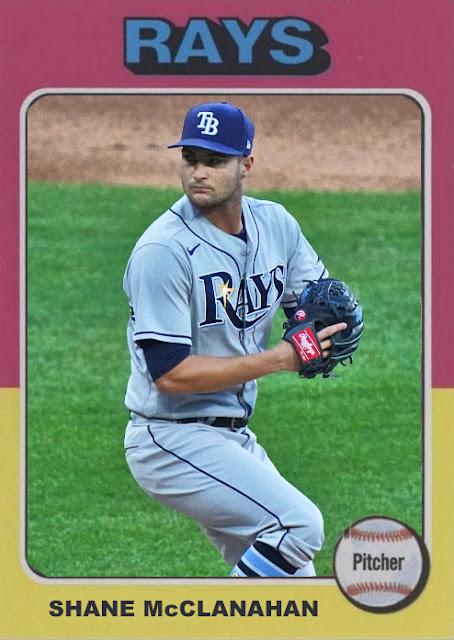 Right now, there's a guy pitching for the Rays named Shane, and somehow it's not this guy.

Yeah, after 3 years of him gestating in the minors following the Chris Archer trade, Shane Baz, one of the most sought-after and feared pitching prospects in the league finally debuted for the Rays, and as I write this, has been pitching really well. This is a big deal, because the Rays are already in first, and look to be the first seed in the AL. They will be starting Shane McClanahan, Ryan Yarbrough and Michael Wacha in the postseason- two players with postseason experience and one who's excellent this year. And to give themselves even more of an x-factor in this, they have brought up Baz as another potential postseason starter.

Which means the Rays might just be starting two rookies named Shane in a top seed postseason situation. Which is a choice.

And that's really the one flaw in the entire Rays strategy this year. They can outhit competitors, and have enough people that can surprise you, including Brett Phillips, Mike Zunino, Joey Wendle and now Jordan Luplow. They still have a strong bullpen, with a lot of great setup and longman options, in addition to Kittredge in the ninth and Anderson working his way back there. The big stars of this team, including Kevin Kiermaier, Brandon Lowe, Randy Arozarena and Austin Meadows, are still trustworthy. And there's enough depth and flexibility to last them until the World Series again.

But...the Rays' starting pitching is the most lackluster one going into the playoffs.

You think of 9 other teams going in, even counting some of the ones that have a chance to squeeze in, and I can name one or two healthy, big-star arms and one or two surprise ones behind them. The Jays have Robbie Ray, Steven Matz and Jose Berrios. The Sox have Sale, Eovaldi and Pivetta. Even the A's, a long-shot for the playoffs, have Sean Manaea, Frankie Montas and James Kaprielian to stay safely behind. the Rays have Shane McClanahan, and then some shaky Michael Wacha and Ryan Yarbrough seasons, and also maybe Shane Baz now, or Luis Patino. Only Yarbs remains from their 2020 rotation, and Glasnow's injured. So...there's a lot riding on Baz, and on the rest of this rotation, to stay strong in a playoff scenario. Because the Rays are the alpha in the AL, and some misfires by the rotation could bring someone like the Red Sox, or Blue Jays [or sure maybe even the Yankees, I dunno] further into the postseason.

Don't get me wrong, a Rays ALCS would be boring...but I have a feeling this could be how the Rays lose a playoff series. And I'd rather them lose one to someone tame than to the Astros.

Coming Tomorrow- A power-hitter for a team that still has a very good shot of clinching the NL East.