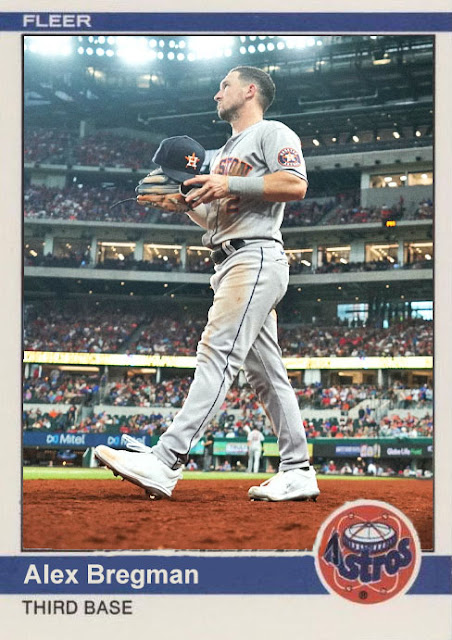 Here are some storylines that would have been a lot better than the Astros just winning the AL West in a runaway yet again.

-The Athletics retain their midseason lead over the Astros, continue to pound them into submission, eliminate them from the conversation in late August, and find a spot in the postseason against the White Sox, making this ALCS a thrilling rematch of last season's wild card series, with different stakes and new heroes and villains.

-The Mariners somehow build off their July-August run, go toe to toe with the Astros in August, nailing them as the season ends, then watching with glee as they lose a one-game playoff to the Blue Jays. Jake Fraley, Tyler Anderson and Paul Sewald become postseason icons as the Mariners end their 20 year drought.

-The Angels keep Trout, Rendon AND Ohtani, and replenish the pitching staff at the deadline, outmatching the Astros throughout the season, and leaving them plenty of room to take the West.

-The Astros go through a Yankees-like train of injuries, losing Altuve, Correa, McCullers, Greinke, Alvarez, Bregman and Gurriel in a week's span, and having to bring up replacements to get by. And unlike the Yankees, this kills them and they can't come back for it.

-The Rangers use Kohei Arihara, the new young cheap free agents, and Adolis Garcia's home runs to defy logic and ascend the AL West, pushing LA to last, and embarrassing Houston in August.

-The Astros get returned to the NL Central and get pulverized by the Cardinals in September.

I'd rather a season where any of those happened, as unlikely as some of them are, than another boring year where nobody can catch the Astros and they just make the postseason automatically almost. The lack of serious reparations on this team is allowing them to continue their reign over the game, and even if they miss the World Series this year, they're still an evergreen contender. And new members like Luis Garcia, Jose Siri and Jake Meyers are ensuring that this team has a chance even when Altuve, Bregman, Correa and the gang all graduate.

All I am asking...is for someone in the AL West to become better than the Astros. Not for a month, not for a few games. For the year. Give them a chance to feel like losers, which they don't get enough chances to. Let them sit with what they've done. Show them how you felt. I'll take any of the other 4 teams, including the once-loathsome Rangers. Just...for 2022, shoot for that particular fence.

Because the Astros are probably gonna be awesome next month, and we're once again looking at an Astros-Rays ALCS unless one of the more fun teams sneaks a win through. So I really hope this team loses some of their momentum over the coming weeks, and lets a more deserving competitor get some glory this year. Cause...I don't know how many more years of this crap I can take.

And I should know about contenders that don't need to be there, I'm a Yankees fan.

Coming Tomorrow- A third baseman who broke into the league 13 years ago, and is still chasing postseason glory.