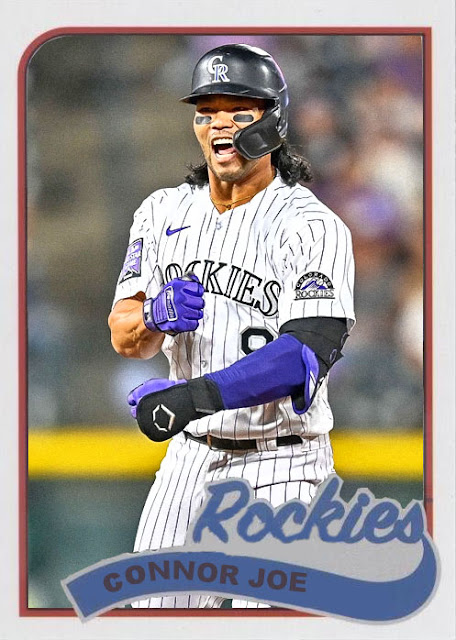 A lot like Patrick Wisdom, Connor Joe has had a very strange journey to where he is now.

Joe was a first round pick with the Pirates in 2014, which seems...innocent enough. You know, Pirates need prospects, the big guns are going places. In 2017, he's traded to the Braves for Sean Rodriguez. A month later, he's traded to the Dodgers for international bonus slot money, kinda cruelly I might add. The Reds claim him in the Rule 5 draft, then trade him to the Giants for a minor leaguer and suddenly he's an opening day starter for the Giants in 2019, starting the first 8 games...and getting a single hit in 16 at-bats. So, he's immediately returned to the Dodgers, gestates in their minor league system for another year, doesn't play at all in 2020 due to the suspension of the minors, and is released at the end of 2020.

Which is a lot, already. However...the Colorado Rockies took a chance on Connor Joe. And unlike the other teams, Connor Joe proved his worth with them, resulting in a promotion to the majors, a starting outfield spot, and and a .285 average with 35 RBIs and 8 homers in 63 games. Out of nowhere, Joe has become a sturdy bench bat, a reliable lineup presence, and a decent outfielder. He's also become one of the Rockies best performers, alongside C.J. Cron, German Marquez and Ryan McMahon.

Honestly, I'm glad that a success story can happen in Denver. It's happened all over this year, with people reviving their careers in Chicago due to a surplus of roster spots on the north side, and it's happened to a lesser extent with people like Darin Ruf and Alcides Escobar, people we thought were done having great seasons. Connor Joe seemed destined for the trivia books, but he's working on a nice reclamation project in Denver, and I hope he keeps it up. I have no idea what the Rockies are going to look like next year with a few less contracts and more of an emphasis on homegrown youth, but hopefully Joe factors into it somehow.